On Saturday, a couple of friends and I ventured across the Potomac River to shoot the monthly IDPA match at Sanner's Lake Sportsman's Club. The club puts on a quality match with six interesting and challenging stages.

The first stage our squad shot was a standards stage involving both strong hand and weak hand shooting. It was not the sort of stage I wanted to warm up with! The stage started with six rounds in the gun, held in our weak hand. After two shots on each of three partial targets, we reloaded and reengaged the targets, strong hand only or freestyle, and then again with the remaining hand option. I did not do well, racking up a horrific, and honestly unexpected, 20 points down. At least it gave me the chance to put my "get over it" mantra into play.

The next stage had us pulling a rope that activated a swinging non-threat target. After starting the swinger we moved to engage an array of three targets from cover, before advancing to a port in a wall. Through this port there were four targets which had the swinging non-threat in front of them. I faired better here, with 4 points down. 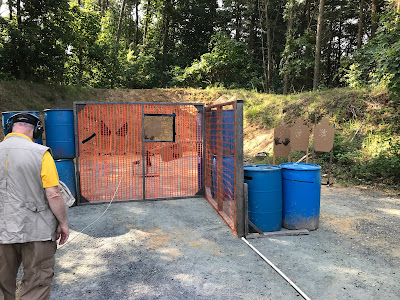 Feeling a bit more confident, I was ready to take on the next challenge. This stage was little more complex. We engaged the first two targets from the right side of wall of barrels, followed by a single distant target from the left side. Moving to an opening between walls, a single target was hiding behind another barrel stack. A slight shift in position opened up three more targets. Finally we crossed through the opening, to find one more target hiding beyond another barrel. It was a fun stage, that I finished -0. I may have found my groove.... 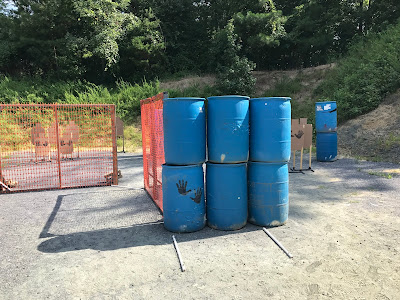 But, what's this? Another one-handed shooting stage? This time we were seated with our gun and the downloaded mags on the table in front of us. The stage consisted of two strings of six shots on three targets; one shot weak hand only, the other strong hand only. This time I was 10 points down. Ouch.

The next stage was fairly straightforward, with a small challenge to start. The first target was directly down range, but was fronted by a piece of steel that had a circle the size of the -0 zone cut out. Essentially anything other than center hit was going to be a miss. As a good thing, the ping of steel would tell the shooter he needed to try again. There were five more targets arranged on either side of the bay, hidden by barrels that were to be engaged while advancing down the bay. All targets required three hits each. 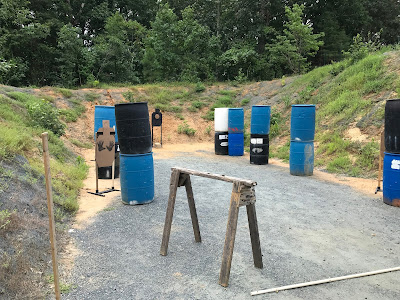 Oddly enough I felt confident going into the stage. And indeed, I hit my first three shots dead on, hearing no steel hits and needing no make ups. All other shots were good as well, and I racked up another -0 stage.

The last stage included lots of movement — by the shooter and the targets. On either side of the bay there was a matching set up consisting of an open target, a steel popper, and a hidden swinger. Each popper activated the swinger on the opposite side. We started facing up range, our backs to a wall. At the start we moved to one side of the wall, engaged a paper target and the steel popper, then moved to the opposite side. There we engaged the stationary paper, the other popper and the now appearing swinging target. We then moved back to the other side to shoot the second swinger. Again, all paper targets required three hits each. My eight points down were earned mainly on the moving targets. 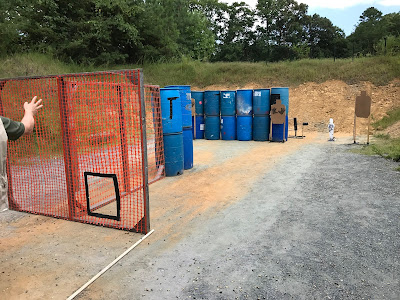 Despite some hot and cold performance on my part, the end results were not too disappointing. I finished 12th of 58 shooters overall, and 3rd of 24 in SSP. The match was very well run and we finished shooting before noon. The road trip with friends was most enjoyable which added to the fun of the day. I'm always impressed with the events put on by the folks at the Maryland club. It makes the trouble of traveling into the (not so) "Free State" a bit more bearable.

And in the days ahead, some serious work on strong hand and weak hand shooting is in my plans...

A few more pics from the match here.