Our son is no stranger to firearms. He built his own AR rifle a couple years ago and he's also an experienced handgun shooter. However, he's been looking forward to actually buying his own handgun for a while. After celebrating his first legal beer in the U.S. recently, our now 21 year old son finally made that purchase he's been anticipating for a long time - a SIG Sauer P226 Legion. Detouring by the gun store on his way home for Thanksgiving break, he picked up the gun he had already paid for online. Then on Monday he met me at the office at lunchtime and we headed over to the indoor range to try it out.

After he shot the first few magazines through the gun, I asked for a chance to shoot it. I have to admit to a bit of envy of the high end SIG he opted to start out with. He's long enjoyed shooting my "basic" P226. He's been working hard and saving for some time in preparation, so I don't blame him for "going big." 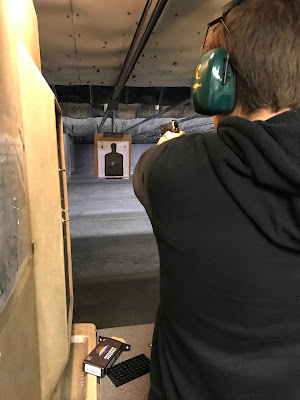 I also brought along my SIG P320 Compact. I had only put 50 rounds through it since the trigger upgrade, mainly to check function. This time I shot a more organized practice session at 7 and 10 yards. I was more than happy with the groups I was getting. After 100 rounds, I checked on my son, who was doing quite well, and was very happy with his purchase. I watched him for a while longer, much to my own enjoyment. I offered him my last box of 50 rounds, on the condition he let his dad shoot one more magazine with the new gun.

As with my pleasure over his choices for good beer, I'm also glad he has good taste in firearms too.

My son told me that when he bought the gun, the person who handled the paperwork and the person who verified the purchase, both wished him a happy birthday. When the range proprietor checked his ID he too remarked "Happy Birthday." It seems I'm not the only one who enjoys it when someone makes that first purchase.