In what has become an annual outing, my son and I hit the range early Thanksgiving morning. It was a beautiful sunny, 31° day as we arrived and unloaded the gear. By time we finished about 90 minutes later it had warmed by 10 degrees, but the cool temps didn't dampen the enjoyment. 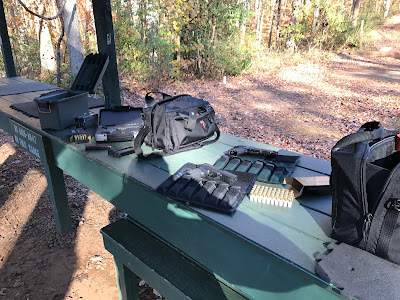 We hung a couple of the "color shapes" targets and focused on slow fire from the 7 yard line. While he shot his new SIG Legion, I worked with the P320 Compact. I made a brief diversion to my P226 and also fired a few rounds with his gun.

I've found my concentration lately with practicing slow fire with patience in watching the sights during the trigger press is paying off. Working through all eight shapes on the target with 10 rounds each, all but three were in bounds. Considering the blurriness of the targets even at that distance, I'm happy.

The biggest thrill, as always, was shooting with, and advising my son. His groups were quite impressive, and his gun safety awareness is exemplary. He's had a good teacher. ;-)

Finally, looking at the amount of brass on the ground, we decided we better stop and begin the chore of picking it up. And there was also the promise of a bagels and smoked salmon breakfast waiting at home.