A Beer to Honor Benedict XVI

As reported in the Catholic Herald...


The 'Beer-nedict XVI' wheat beer was unveiled at a conference in Ohio
An Ohio brewery has produced a specially-commissioned beer in honour of Pope Emeritus Benedict XVI.

The Bavarian-style hefeweizen, called Beer-nedict XVI: Pint-ifex Maximus, was launched at the conference of the Society for Catholic Social Scientists in Steubenville, Ohio last Thursday.

The Benedict XVI Centre of St Mary’s University, Twickenham, organised a fringe event at which the beer was unveiled and the first kegs received a priestly blessing.

The beer was made by a local Ohio brewery, the Hightower Brewing Company.

The writer Marc Barnes, a graduate from Franciscan University of Steubenville and a PhD student at the Benedict XVI Centre, said: “What better way for the British and American allies to meet than over beer – certainly, a party over tea would have brought up old feelings between the nations.

“My hope is that the joy of being Catholic will spill over from this particular feast and inspire new, creative work among all the academics and intellectuals milling about between the bar and the bluegrass band.”

The Benedict XVI Centre, a hub for research on religion and the social sciences, was launched last year with the approval of the Holy See. 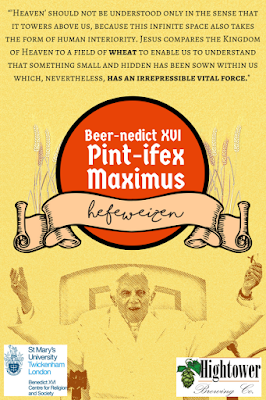 The Holy Father is known to appreciate a good beer from time to time.

See the complete article about the Pope's beer honor at the Catholic Herald.
Mused by David