This weekend a group of Virginia shooters ventured into Maryland for the monthly Sanner's Lake IDPA match. Three of us rendezvoused on this side of the border to carpool, while two other friends drove by another route. Together, we made up half of our squad.

This month's seven stage match incorporated a quick "warm up" drill set up on all stages, and shot first by all shooters; one close target, two shots to the head, reload, 4 shots to the body. I'm seeing this done at more and more matches lately, and it's a feature I really like. And a few more rounds down range is never a bad thing. For me, this was a -0 stage.

The first scenario stage for our squad had us facing nine targets arranged in a semi-circle, with four non-threats placed menacingly in front. The stage required one body shot to each, followed by one head shot on each. I opted to make up a -1 head shot and finished -0 on the stage. Whether I actually gained that one second back is debatable, but I wanted the -0 score.

The next stage provided a number of challenges. Starting out, we engaged two close targets while backing up. Then turning, we found a challenging two-target array obscured by both a non-threat and reduced by black hard cover. Adding to the difficulty, the shots were made around a wall, requiring a hard lean. I saw a lot of wood flying on the this stage from errant shots hitting the wall, including on one of my own shots as well. I also had a hit on the non-threat. After engaging the targets from that point of cover, we stepped on an activator pad on our way to the next position which set a rocking target in motion.

After engaging the rocking target at the next point of cover, we also found three steel poppers and three more paper targets. One of the targets had barely more than the head available. Although the hit on the non-threat and a miss contributed to 12 seconds in penalties, I thought the stage was a lot of fun. 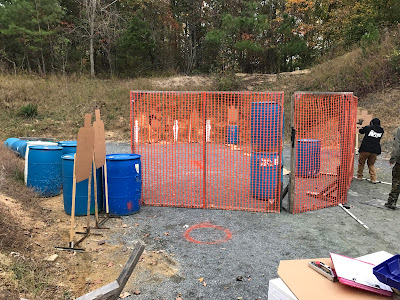 Simulated theatre seating was the setting our next stage. From our seat we faced six targets, each requiring three hits. The arrangement of threat and non-threat targets meant leaning and shifting in the seat. Drawing and reloading while seated adds a level of complexity to the shooting that is not often encountered. Most seated stages I've seen involve table pickups of the gun and magazines. This was a quickly shot stage and though I finished -1, it was my highest placing stage; 5th overall. 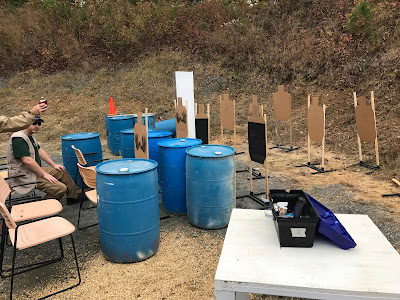 There's always some WHO and SHO shooting at the match, and this month the challenge included an extra twist. The stage consisted of three identical 5-target arrays. The first group was shot through a small port in the wall. Backing up we shot the other two arrays around cover, using on our inside hand! Shooting around the left side of barrels meant using our right hand only, and moving to the right side of the stage we shot using the left hand only. Each target required one hit.

I rehearsed my plan in my head repeatedly before shooting, I did not wish a repeat of the mistakes at the Potomac Grail of using the wrong or both hands. I was just 3 points down, two of which were earned on the "easy" two-handed shots. 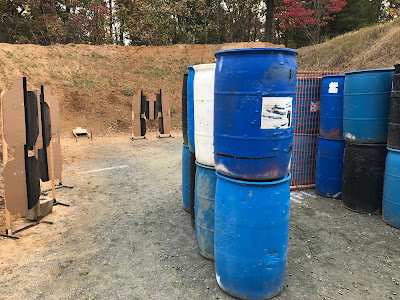 The penultimate stage of the morning had the most movement required of the day, with five threat targets shot from three points of cover. A wide swing with the gun was required for the first three targets shot from cover, two of which were partially blocked by non-threats. Moving down range to the left we found a target near some barrels, then crossing the final position another partial target was engaged. Interestingly I opted to shoot two make up shots, on the second and fourth targets despite, as it turns out, already having two -0 hits on each — gotta learn to have confidence in my shooting.

Our squad finished the match on a super fast, and fun stage. Starting with six rounds in the gun, we shot to slide lock at an open target. After a reload we engaged a popper that released a very fast out-and-back disappearing target, then finished up on another popper. Many of us were happy to get two holes on the quick mover. My -4 stage score included a -3 hit on the swinger.

One of the hallmarks of the Sanner's Lake monthly events is how quickly the matches are completed. The course designers create stages that are both interesting and challenging, but can also be shot in a remarkably short time. We faced no backups all morning and progressed rapidly through the courses of fire. After a quick stage breakdown, we were loaded up and in the car for the drive home before noon.

I was really pleased with my shooting this day, and things just seem to gel for me. I finished 10th of 57 overall, 4th of 28 in the SSP division. The good shooting only added to fun of the morning, however the real pleasure of the day came from the time spent with friends. It was a most enjoyable adventure.