We visited a new brewery this weekend. It's not often we check out a new place as soon as it's opened, preferring to let the kinks get worked out first. But we happened to be in the Blacksburg area for the second day open for Sinkland Farms Brewery in Christiansburg so we stopped by for drinks and food. 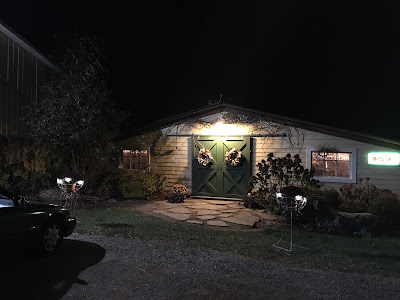 It was already dark as we drove down the road to the brewery, relying on the address entered in Google Maps. As it turns out, the GPS had the location a bit off and when we were informed "You have arrived" we saw nothing. Colleen noted that she saw cars in a field a short way back and we found the brewery. Unfortunately, the sign as the road was not lit and we had driven by. But, finally arriving, we were in for treat.

Passing through a large sliding door in the barn, we entered a spacious seating area, complete with several large umbrella heaters and two fire pits. Copious light strings hung from the rafters added to the festive feel. We stopped at the bar first to review the menu. After ordering a couple beers we headed outside to the food truck. The Creole That food truck was on site serving hearty cajun-style meals. 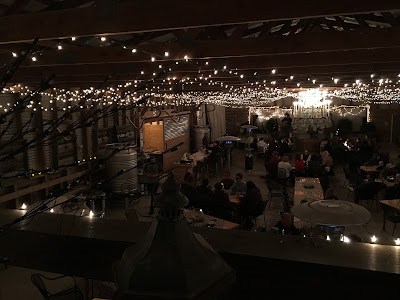 My opening beer was Sink Or Swim IPA. This "sessionable" 4.7% ABV IPA has rich citrus and fruit hops, but notably low bitterness. It made a perfect accompaniment to my Shrimp & Grits food choice. Colleen opted for the Yukon Cornelius Stout, which she enjoyed with Cajun Shrimp Mac & Cheese. 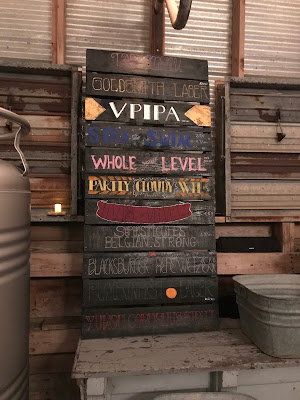 We sipped our beers while enjoying some live Blues from the Howling Mudbellies. We both remarked how the music volume was load enough to be heard, but not too loud to preclude conversation. That's a balance often lacking, and why we often avoid venues when they have live music, even if we would otherwise enjoy it.

Thoroughly enjoying the food, the music, and atmosphere, and most importantly, the beer, we opted to try out a few more of the offerings. I ordered a pint of Elvis On Velvet. This Amber Lager is described as "malt forward, barely any hops." Another well-done beer, though a little mild for my personal preferences. 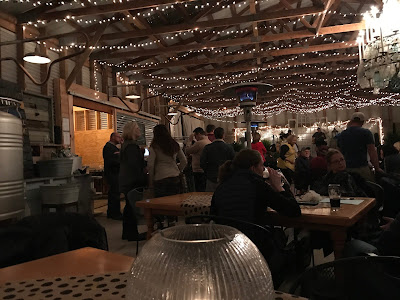 We also ordered tasters of Pumpkinfest Lager and Sophisticuffs Belgian Strong. The pumpkin lager had a nice balance of sweetness and the classic "pumpkin spice." I was sorely tempted to order another, this time a full pint. Colleen drank the Belgian Strong, which I neglected to try.

John Bryce, the owner and brewmaster at Sinkland Farms Brewery brings extensive experience to the Blacksburg venture. He's served as a Manager of Brewery Operations at Starr Hill Brewery, a Production Manager and Shift Brewer at Old Dominion Brewing, and as Head Brewer at Capitol City Brewing, among other brewing experiences.

It was fortuitous timing that we were in the area for the opening weekend at Sinkland Farms Brewery. We had quite a pleasant evening enjoying a tasty dinner and several excellent beers in a relaxed, fun atmosphere. I have no doubt we'll be making return visits to the brewery during future stays in the Blacksburg area.