Virginia craft beer fans have lost a friend and good beer advocate. Rayner Johnson passed away on Saturday, after suffering a stroke last Tuesday. Ray was perhaps best known as the force behind the successful and popular Blue Gray Breweriana show and was an avid collector himself. He was also a ubiquitous presence at craft breweries and beer festivals throughout Virginia. Chances are, even if you didn't know it, you probably saw him, somewhere, over the years.

It wasn't unusual to find Ray holding court in a brewery's tent at one of the local festivals. One more than one occasion he pointed me toward some rare or interesting beer being poured at an event. I had the pleasure of Ray as a travel companion for the May 2009 World Beer Fest in Raleigh, NC. Even outside of Virginia, Ray knew where to go and we enjoyed many a local beer that weekend.


I last saw Ray when we visited 6 Bears & A Goat Brewing in February. I spotted him at the end of the bar as we were sitting down. We got settled and when I turned to go greet him he had left. I have regretted missing the chance to talk ever since.

Virginia beer blogger Tom Cizauskas captured Ray and I in conversation at the NoVa Beer Fest in 2009. It's a photo I've long cherished. I don't recall exactly what Ray was telling me, but I was quite obviously memorized. 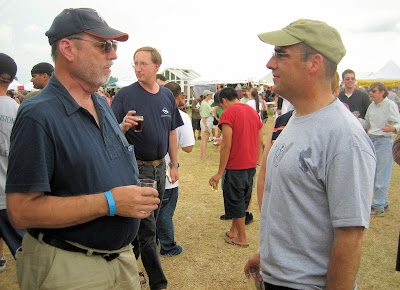 Requiescat in pace, Raynor Johnson. You will be missed.