This week's range visit was a fun family outing. Our son is home for a couple weeks, so he joined Colleen and I, along with our friend "Checkered Flag." The range was slow so we all had adjacent lanes. I also rented the new SIG Sauer P365 to try out. I've been keenly interested in the gun, but have never seen one "live," so was excited when I found out that Winding Brook had it available for rent.

I started my time with the P365. I set the target at 5 yards, and saw a very nice group of 10 hits form. My three companions followed with a magazine load each, leaving me 10 more rounds to play with. 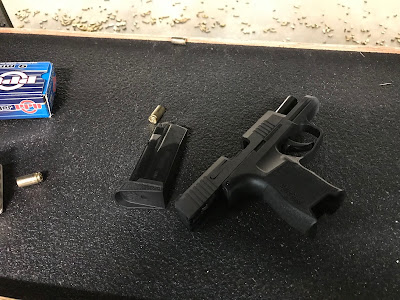 My initial impressions of the SIG P365 were very favorable. The gun is a little snappy, but it feels very solid in the hand. The shape to the grip allows a good purchase, even with the pinky finger hanging below. The range didn't have a 12 round magazine to try. It's a small gun but it feels bigger than I thought it would. The P365 is surprisingly easy to shoot.

Getting my full size SIG P320 out, I went through a box of ammo shooting the various sized shapes on the target at 7 and 10 yards. After 50 rounds I started to load more magazines but then decided I really wanted to shoot the P365 a bit more. I splurged on another box of ammo from the range.

This time I set the target out at 7 yards and my son and I took turns shooting at the target's various sized squares, circles, and diamonds. I was impressed with the accuracy for a small gun. I fired off 10 rounds as fast as I could and still shot well. The P365 sights comes back on target very quickly. Even shooting strong hand only proved doable.


Putting the P365 away, my range session was finished with some slow 15 yard shooting with the full size gun.

After shooting the new SIG P365, I was not dissuaded from my desire to get one of my own. As I said after the trip, "This gun feels like I need to buy it."

We finished our outing with a tasty meal and fun conversation at a local "burger joint." I hadn't been shooting with my son since he was home for the Christmas break so it was fun to do. I didn't get the chance to shoot his SIG Legion this time out, so we'll just have to plan another range trip soon.