Has it only been 10 days since I last made it to the range? Seems much longer. Anyway, I knocked off a little early on Thursday and headed down to Winding Brook. I had in mind a few things I wanted to review just one more time before this weekend's match. (I know last minute practice doesn't really change anything, but it does help with the head game.)

I set up my first target at 7 yards and expended 50 rounds doing strong and weak hand only shooting. I was pretty happy with the one-handed shooting at the close distance — and also felt the effect in both wrists! Next up was head shots at 10 yards. I find it interesting that when shooting indoors at the IDPA head target, I get decent groups but they are consistently low. I think I shy away from the target hanger. I have to concentrate diligently on sight placement over the target. Starting my last box of ammo I moved the target to 15 yards. After a few magazines, I opted to move it in closer and finish with a little more SHO and WHO shooting. Maybe it'll pay off.

As I was leaving the range, I looked over at the large mound left from construction in the area. Am I the only one who sees any pile of dirt and thinks, "shooting berm" ? 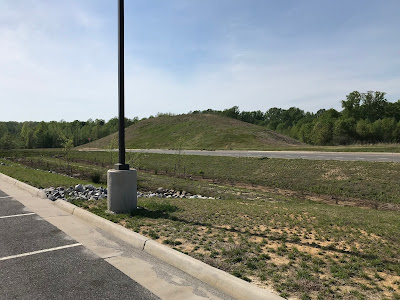