Took the Shockwave to the Range

I finally got around to to hitting the range with that Mossberg M590 Shockwave I won in the drawing at the Chesapeake Cup in February. In all honesty, I've been avoiding it to some degree. I wasn't really sure how to shoot the thing, and have spent a lot of time viewing videos online and dry firing in front of a mirror. Now a bit more confident, I took it down to Winding Brook for some live fire.

Confirming the range allowed the gun to be shot, I was reminded that only "aimed fire" was permitted, no shooting from the hip. I had assumed that already, and in fact what I had planned. I had brought along a mix of 00 buckshot and slugs, the only shotgun ammo the range permits.

With the target at five yards, I loaded a round of the 00 Buckshot. I noticed that a second RO had appeared behind me, presumably to confirm my safety and obedience. I was pleased to see the shot pattern pretty well centered on the target, with the wad hole off to the right. A second shot found better placement. I then moved to the slugs. For each shot, I loaded a single round in the gun. I didn't want to have to unload if I decided I had had enough. The next few shots started drifting high and left; I think I was starting to think too much about the gun's relation to my face — even though I was having no issues — and pushing the grip out. 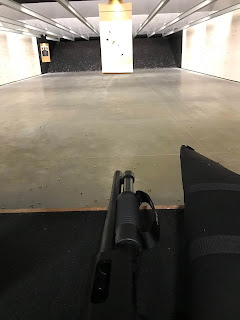 After a few more practice rounds, I bagged the shotgun and switched to the handgun, shooting the SIG P320. I shot another 150 rounds with the pistol, at 7 - 15 yards, and was pretty much at my limit of endurance. However, I still had a some loose shotgun slugs left in my bag, so I opted to destroy my pistol target with a few more shots from the Shockwave.

It was a short session. Literally. When I got back to my car I realized I had only spent about 30 minutes total in the range. No wonder I was tired! The Mossberg Shockwave was not overly difficult to shoot. I'd even call it fun to a point. I need a lot more practice before I would consider myself prepared to rely on it for home self defense. I am also reminded that it's been a long time since I did any shotgun work, so maybe it's time...