My son and I headed down to the range after work to get in a little more "father & son" shooting time before he heads back to school next week. I opted to take along my Compact SIG P320 this time. I had not shot the gun since the Chesapeake Cup match in February. My plan was to work on slow fire, and trigger and sight control. 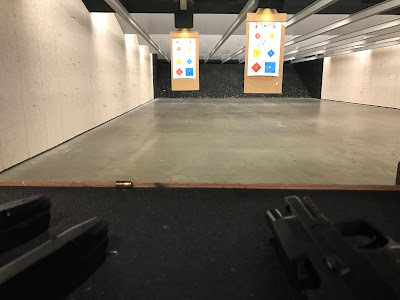 I moved the target carrier around between 7, 10, and 12 yards, and made use of the various sized aiming points. I was generally happy with the shooting, up until my first round of strong hand only shooting. Those first 10 shots were surprisingly inconsistent. Shaking my head I went back to shooting with both hands for a bit. Taking a break I stepped into my son's lane and shot his P226 Legion for a bit as well. Very nice gun; makes me want to get out my (plain) P226 next time.

The sloppy SHO shooting stayed on my mind. Instead of finishing with something I was sure to do well on, I opted to shoot my last 20 rounds strong hand only. Since that would be my memory of the day's outing I paid extra attention. The concentration paid off with improved hits and I ended on a high note.

The time passed quickly and we soon headed for home. Unfortunately the drive home did not pass as quickly. Without warning, traffic was at a standstill on the Interstate. We didn't move for a long time, and eventually the road was closed and we finally made it to an exit to take another route home.

Side note observation: If you have been sitting in non-moving traffic for 20 minutes, and you still manage to run into the car in front of you, you might be an idiot. Please stay home.