The monthly IDPA match at Cavalier Rifle and Pistol Club was held this past Saturday. The new shooting bays at the club are finally (almost) finished and this was the first IDPA match to be held in them. I was looking forward to seeing the new setup. Along with the new facilities, the monthly match has moved to the fourth Saturday.

The new facilities are quite nice. It is my understanding that even more new shooting bays are planned. In addition to the change in bays and the day, the weather was fittingly different. Instead of the rain that has plagued so many matches of late, the sun shown bright and warm. It wasn't too long after I arrived that I regretted being one of the few shooters opting for long pants. I'm slow to "convert" my planning to summer. (I also noted my sunburned neck the next morning.) Suffice to say, it got hot, fast. 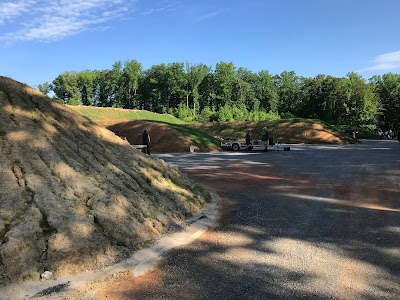 Five stages were set up in the new bays. I found all of the stages to be interesting and fun, not to mention challenging. Even the "simpler" stages were not as straightforward as they looked and we were really forced to think about strategy and stage planning.

Stage 1 consisted of two quick, 8 round strings. For the first string our unload gun and magazines were on a bench in front of us. Loading the gun, we retreated to find a target to each side through a narrow opening. Backing up further, there were two more targets, one on each side around a barrel. When I shot the stage, my brain swapped the targets to be shot, and I hesitated in getting into position. I also took a makeup shot I didn't need, which hit a non-threat. For the second string, we shot four close targets from a seated position. 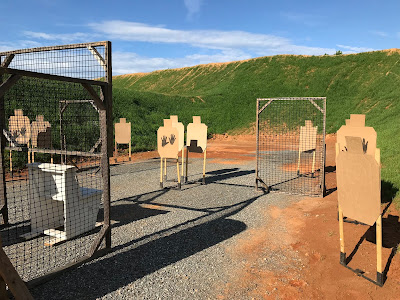 The second stage we shot offered an interesting twist; all magazines were downloaded to six rounds, the unloaded gun and magazines were staged on a barrel, AND all magazines were to be left at the start position and not stowed on the belt at any time. There was a target right in front of the start position, and two more targets were on either side of the stage, only one visible at each shooting position, for a total of five targets each requiring three shots each. Most shooters opted for a tactical reload after the first target, a slide lock reload after the first two targets (with an extra shot on one), grabbing a reload off the barrel on the way to the last two targets which were then engaged with no make up shots available. It was a fun stage to shoot, and my best of the match with zero points down. 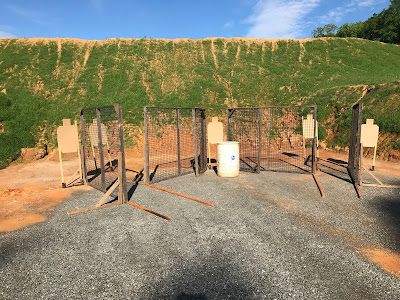 The next two stages took advantage of the new, larger bays. Stage 3 had us hitting near and far targets from opposite ends of a wide wall. Even on the long shots from cover I felt good about my shooting, finishing 4 points down. Stage 4 was shot while moving down a hallway across the bay, turning the corner and crossing back the other direction. Targets were found all along the way. A couple steel targets kept dodging my bullets, but I finished the stage just 3 points down, even if it took extra time to complete.

The final stage was an interesting standards stage, though some of us had a difficult time grasping the concept initially. There were three targets set on either side, and four steel targets downrange. All targets had to be shot from the shooting boxes, reloads were only allowed at slide lock, and targets had to be shot in priority, near to far. Targets could be engaged from any of the shooting boxes where they were visible, as long as the priority rule was followed. One could leave further targets for closer boxes, and but could not skip a close target to shoot a further one. (It was probably not as complicated as my mind made it.) 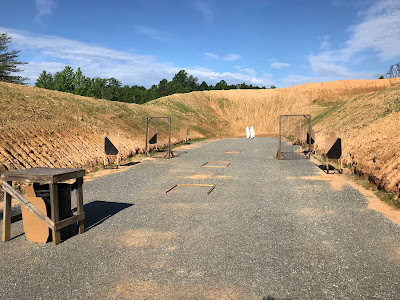 Once I figured out my plan, I felt good about shooting the stage. Unfortunately it didn't come off as well as planned. On the second target, I (thought) I saw one -0 hit and the second hole low, partially on hard cover but still in the scoring zone. When it was scored, it turned out that both shots were low, one totally in hard cover. What I saw as a good hit was actually a shadow from a loose paster. I also struggled with the final steel popper. Still, an interesting and fun stage.

This was a very fun match, even if I didn't shoot as well as I would have liked. I finished smack dab in the middle of the pack; 23rd of 45 overall, 9th of 18 in SSP, and 2nd of 3 in SSP EX. In addition to a HNT and a miss on a close target, I felt like was just trying to go too fast. However, in reviewing the posted scores, my raw times were actually on the slow side. That can to some extent be attributed to a bit of poor stage planning, and some unusual difficulty with a couple of the steel targets. Despite all that, it was a really fun match, and I still would rather be shooting, even if poorly, than not shooting at all! On a positive note, I have some plans for my next practice day.

Many more pictures from the morning are posted here.