That's right, I said Budweiser. Anheuser-Busch has released a limited edition Amber Ale for the summer. Freedom Reserve Red Lager is said to have been inspired by a beer recipe written by George Washington himself. Washington's recipe for small beer made use of readily available molasses for the fermentable ingredient instead of malted grains, which were scarce at the time. To create the tie-in with the Founding Father, the brewers at Anheuser-Busch used molasses in their beer to give it sweetness. Washington's original hand-written recipe can be found in the New York Public Library.

While the addition of molasses may offer a thin "inspired by" tag line, the brewery is also using the beer to do good. A portions of the proceeds from the sales of Freedom Reserve are being donated to Folds of Honor, and organization that provides scholarships to the spouses and children of injured or fallen American soldiers. 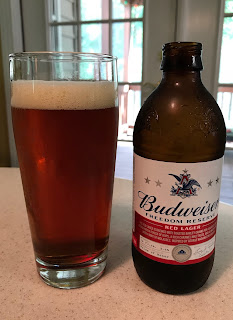 Intrigued by the beer and its story, we picked up a six pack of the stubby bottles to try it out. The beer pours a deep amber with a frothy, but short-lived beige head. A very mild sweet caramel aroma is detected. The malt-forward flavor brings sweet caramel, toasted grain, and a touch of molasses. The mouthfeel is somewhat thin and there's a lingering sweetness in the finish.

Although it's not a "small beer" like its inspiration, it still checks in at a moderate 5.6% ABV. Overall, I found Freedom Reserver flavorful and quite drinkable. I certainly won't hesitate to finish the rest of the six pack. Available through September, Freedom Reserver Red Lager turned out to be a surprising, but acceptable option for summer enjoyment.