Last Saturday I joined a group of friends to shoot the 2018 Maryland IDPA Championship held at Sanner's Lake Range in Lexington Park, MD. The match offered a balanced variety of scenarios. (Match book) Half the stages required movement, while the rest were shot seated or standing. (Although on one stage, there was lots of movement, even while standing!) There were fast, close targets to be shot on the move or standing still. There were longer shots, requiring careful aiming at both open and restricted targets. Various movers, of both the threat and non-threat variety, added to the interest. I found the match to be challenging, and a whole lot of fun!

The first two stages our squad shot involved shooting from vehicles. Unfortunately the first stage was dropped from the final results. The second, "Mob Attack" was shot while seated inside cab of a pickup truck. A moving non-threat was activated by pushing the gas pedal of the vehicle. Targets were engaged while shooting through both the passenger and driver side windows. 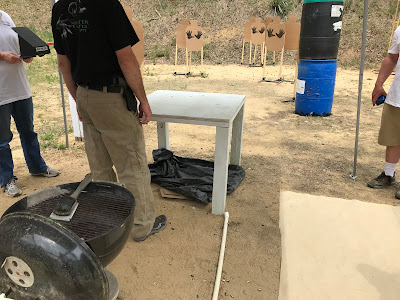 The Standards stage required both strong and weak hand only shooting, at close targets. I've been shooting well with one hand as of late, and even practiced, with much success, just a few days before the match. Alas, this was not one of my better stages.

"Wolf Pack" added the challenge of shooting from an unstable platform. We stood on a suspended platform while shooting at targets that had one side cut off, simulating a wolf shape. The targets were placed in different orientations so you had to pay attention to the location of the -0 zone relative to the rest of the target. One target was a swinger activated by shooting a steel popper. Most of the swinging bridge type stages I've shot moved mostly along one axis. This platform was quite free moving, in all directions, and I had to concentrate on smooth movements and keeping my legs loose.

It's fairly common start an IDPA stage seated and then either stand or remain seated while shooting. "Office Attack" may have been the first time I started standing, but took a seat before shooting. When you sat down, an up and down non-threat was activated that repeatedly exposed a (mostly) head only target out at about nine yards. There were six other targets and two steel poppers further out to 20 yards. 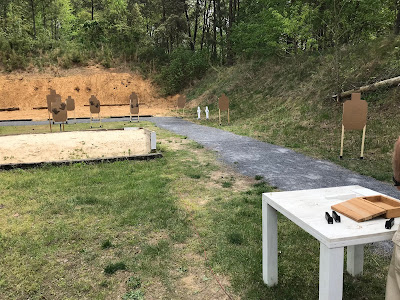 One thing I've noticed about matches at Sanner's Lake is that a lot of the props have electronics behind them, and moving targets — threat and non-threat alike — often move in random ways. The up and down "good guy" on this stage would move a few times, then pause and move again. As soon as I fired off one of my shots the non-threat popped up and I knew I hit it, with a perfect center-of-the-head hit. It was the only HNT I earned in the match.

After a delicious lunch served by Southern Bobby-Q Catering, we moved on to the final five stages. "The Steaks are High" saw us facing uprange at the grill, tongs in hand. Six targets, close but obscured by barrels and non-threats, required 3 hits each. It was easy and tempting to shoot this one too fast. Many shooters had misses from shooting through barrels. I saw plastic fly in one of my shots and made a well-placed makeup shot.

The first stage for our squad offering a chance to move, "Home Defense" was a classic shoot and move stage, with nine targets engaged around walls and through a port. Despite some menacingly placed non-threats, the close targets offered the chance to shoot fast while moving through the course of fire. On some of the targets, slowing down to make headshots to avoid a non-threat was an option. 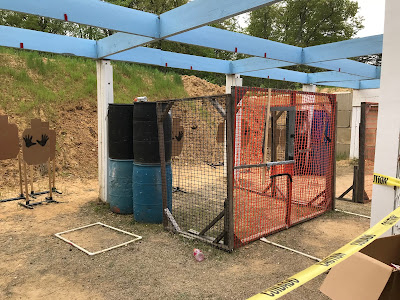 The stage called "Home Invasion" was one of my favorites. It was also the one that had me stumped on a plan when the stage descriptions were sent out prior to the match. After starting with "bad breath" distance shots on the first target, at the next position we faced a couple targets at the 20 yard line. Moving down a hallway, in addition to static targets, we encountered two movers; a drop turner activated by a steel popper, and an up and over target that was activated, after a delay, when the shooter passed an electric eye. The course layout was such that one could easily be faced with an empty gun when the disappearing targets came up. I often try get in some extra shots on such targets, if possible, so I was considering that two tactical reloads might be in order.

I rarely use the tactical reload in a match. Yet here I was thinking about doing two in order to have an ample ammo supply for the movers, and to make up any long misses. After walking the stage,  I decided that was indeed my plan. It worked out well and I was pleased.

A couple of 15 yard plates, placed at the shoulders of a non-threat, started the shooting on the stage, "Trap House." After dropping a pizza box from our hands, we engaged the two plates from cover. I recall I actually felt confident about hitting the plates, despite seeing lots of repairs on the nearby penalty target, and indeed hit them 1 for 1, avoiding the non-threat. Negotiating the zigzag course, we found eight more threat targets. 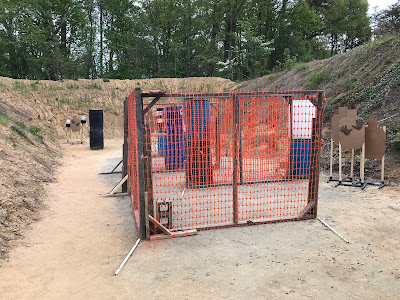 I was the last shooter on the last stage of the day, "Coming Home." Two steel poppers, one placed deviously in front of a non-threat, began the course of fire. We found a couple of head shot only targets, fronted by a non-threat in the center of the stage. At the final point of cover, we had to flip a light switch that activated a swinging non-threat. The non-threat was another of those "spastic" movers, and alternated sitting behind two threat targets. I saw a lot of shooters getting hits on the three non-threats on the stage. The targets all required three hits each. After the switch was flipped, I got one shot off on the first cycle, then fired my final two on the next cycle. After shooting the other target, I thought I'd take a make up on the first target, but the NT was resting behind it. So I waited, and waited. After about 3 seconds the non-threat still hadn't moved away so I called it done. In the end I was glad I didn't shoot again, which would have added time to my run. I was just 5 points down, and had my best stage finish of the match.

The match ran very smoothly. Shooting started at 9:00AM and we were finished before 3:00PM, even with the break for lunch. There's a running joke that it always rains for the Maryland matches, but the forecasted rain held off until the next to the last stage. The rain was fairly light, and there was no need to bag the targets. I shot my last run in a moderate rain, and it was still one of my best runs of the day. 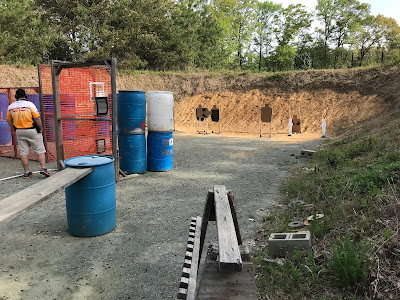 Overall I was pleased with my shooting. The match jitters seemed to be there for the first couple of stages before I calmed. Interestingly, I felt I shot better during the later stages, which is when my energy and accuracy often fade somewhat. I was pleased to have no mental failures in executing my stage plans; any poor performances can be attributed to shooting alone.

Despite the nerves at the start, I found myself much more relaxed than I felt at last month's match. I finished #32 of 147 shooters overall. For the SSP division I was 11th of 49, and 7th of 14 in SSP EX.

It's often said that a pistol match is really just a social even interrupted by occasional gunfire. While the focus is on the shooting, that's actually true to some extent. For this match, eight of my squad were friends with whom I enjoy shooting regularly. That added to the fun, with both advice and friendly banter throughout the day. After the match, four of us celebrated Cinco de Mayo with dinner at a local Mexican restaurant before making the drive home.