We got the first fire of the season going last Sunday. The last weekend of the summer was cool enough for a fire to be enjoyable, yet still warm enough to not require bundling up. After a late brunch I uncovered the woodpile and prepped the pit. Looking at the amount of wood left from last season, I estimated I had enough for two fire pit sessions before needing to restock.
After lighting the fire, I grabbed an older stick from the humidor. I've been eying my last Camacho Imperial Stout Barrel Aged stick for some time, and finally brought myself to light it up. These were a limited, one time release, but cigars are meant to be smoked, not just admired. 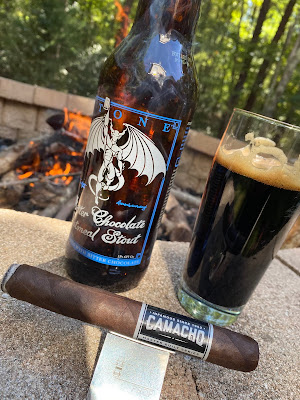 The story behind the cigar reads like a travelogue. The barrels used in the aging of the tobacco for this blend first housed bourbon at Heaven Hill Distilleries. The barrels were then sent to Oskar Blues Brewery in Colorado to age their Imperial Stout beer. Next, the barrels were then shipped to the Camacho factory in Honduras. There, the company’s signature tobacco, Honduran Original Corojo, was aged inside for a minimum of six months. The cigar is comprised of 100% Maduro tobaccos. The wrapper is Mexican San Andrés. The binder and fillers include the barrel-aged Honduran Corojo, along with Brazilian and Dominican tobaccos.
As soon as I lit the cigar, I really had few regrets about burning my last one. I knew it would be as enjoyable as I remembered. The 6" x 50 Toro is tightly packed, with a slightly restricted draw, but still produces copious flavorful smoke. Dark, rich roasted coffee and dark chocolate predominate, with a touch of sweet vanilla coming through as well.
To go along with the stick, I also dug deep into the beer stash and pulled out a Stone Brewing 12th Anniversary Bitter Chocolate Oatmeal Stout. The bottling date stamped on the bottle is 01/15/16. The beer features roasted malt with a sweet, toasted bread graininess. The beer is moderately bitter with a full mouthfeel. It was an excellent match for the flavors of the cigar.
The warm fire added to the enjoyment of the rich beer and cigar. As this would be a nearly two hour smoke, I headed back to the basement to dig for another old beer. I came up with a bottle of Smuttynose Imperial Stout, this one bottled way back in 2006. 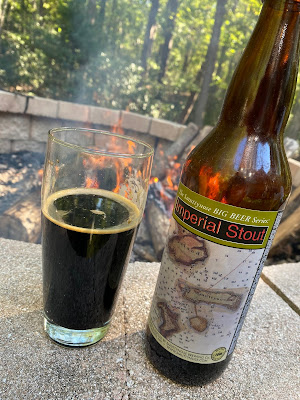 As expected, this stout also paired well with the Camacho cigar. The beer featured roasted malts, dark chocolate, coffee, and some hints of dark fruit. There was very little in the way of hop bitterness. The mouthfeel was creamy and smooth, with a dry aftertaste. After cellaring for fourteen years, the carbonation was still moderate.
As Colleen and I chatted and continued to enjoy the fire, we became aware of the sound of generators in the distance. Soon after that, I received a text notification that our house was without power. At that point, there was little left to do except to feed the fire, grab another cigar to smoke and pull another old beer from the cellar. Apparently I'll need to restock the wood pile sooner rather than later.
To be continued …
Mused by David