After rebuilding the fire, I headed inside to grab another smoke and a beer. The second cigar choice for the early evening was the Liga Undercrown Maduro from Drew Estate. This cigar has been mentioned before in these Musings and is a long-standing favorite. 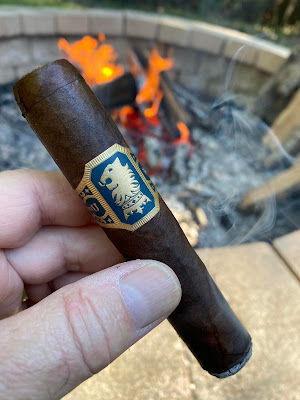 I enjoy the Undercrown Maduro in the 5" x 54 Robusto size. The cigar wears a Mexican San Andrés Maduro wrapper, a Habano Connecticut binder, and Brazil Mata Fina and Nicaraguan Habano fillers. It's a creamy smoke featuring notes of rich espresso, cocoa sweetness, and a hint of dark fruit.
Returning to the cellar, I dug out a bottle of Brooklyn Black Chocolate Stout from the Winter 2006-2007 bottling. For many years we were very good about buying bottles of this brew each year to stash away. Unfortunately I've let that slip the past few years, and we've also worked through the older bottles. This 14 year old was the most senior of the stash.
The beer still maintains a rich aroma as well as good carbonation. The flavor profile retains its richness as well. There's a mildly bitter, semi-sweet chocolate overall profile. Notes of coffee, vanilla, and some nuttiness come through as well. The 10% ABV is wholly undetectable on the palate. 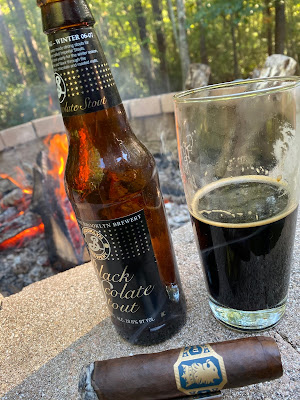 The combination of the dark, semi-bitter beer, along with the espresso and chocolate notes of the cigar made for a delectable pairing. Sadly, after a few hours of the ongoing power outage, I had to leave the comfort of the fire in order to turn on the generator. Now I had the hum of generators both in the distance, and up close, disturbing the peacefulness of the evening.
Eventually the power was restored, thankfully earlier than the resolution time initially broadcasted by the power company. Leaving the fire burning, we retired to the house for a late dinner. After dinner Colleen did a little baking and I returned the yard. Not desiring the time around the fire to come to an end, I stirred that coals and put on a few more logs. Colleen soon joined me and we stared into the fire until late in the evening. And now my wood pile was suddenly very empty.
The long afternoon and evening by the fire was a great way to mark the last weekend of the summer. I do think our time spent out back disrupted some of the local deer who like to bed down in the yard overnight. I could hear rustling in the woods on occasion and the light from my flashlight was reflected back by green orbs staring back at me. At least I am going with the assumption those were deer. 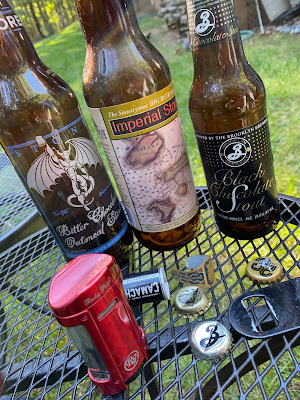 The End
Mused by David