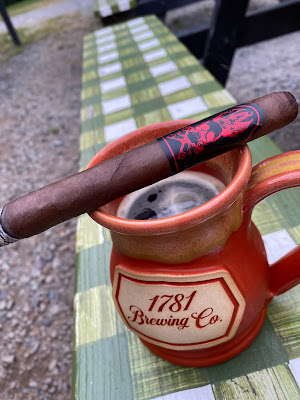 As noted previously, Bishops Blend is a limited release from Black Label Trading. This year's edition was created in two sizes, with only 450 boxes of 20 produced in each of the vitolas. The blend is comprised of an Ecuador Maduro wrapper, an Ecuador Habano binder, and a mix of Nicaraguan, Connecticut broadleaf, and Pennsylvania broadleaf filler tobaccos. The smoke is full bodied with flavors of coffee, cocoa, and some interesting dark fruit notes. It is my humble opinion that this Black Label release is one of the best sticks of 2020.
Most of my previous pairings with Bishops Blend have involved whiskey of some variety. The stick works just as well with the porter, as expected. Besides the tasty beer and smoke, the evening was filled with fun conversation with other folks in the lounge. Inevitably, some of the conversation veered to politics and the social unrest plaguing our country. Despite the presence of viewpoints on opposite sides of the spectrum, the discussion remained civil and even jovial. That's the magic of the cigar lounge.
Mused by David