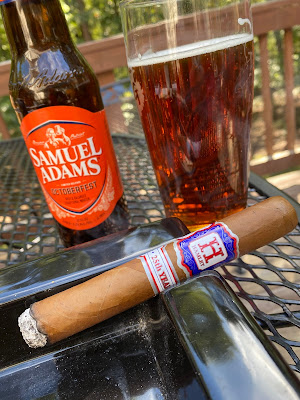 The beer selection for this cool day was Sam Adams Octoberfest. I've been enjoying this seasonal for the past few weeks as it's one I look forward to each year. The caramel and bread sweetness, spiced with just a touch of hop bitterness offers a refreshing drink.
The malt of the beer stepped on the flavors of the mild cigar to some degree. While I enjoyed the flavors put off by the well-constructed cigar, they were just outside my wheelhouse, and didn't hold my interest in the last third. That, combined with the growing chill in the air as the sun dropped below the trees, led me to abandon the stick with a couple inches left. Despite that, I have no doubt that I'll light another when the appropriate setting and mild cigar mood strikes.
Mused by David