After dinner Friday I was in the mood for a nice IPA. I was also in the mood for a good cigar. IPA's aren't always the best companions for cigars, so I had to give my selection some thought. I originally had my eyes on some new cigars I'd not yet tried, but opted for the known.

I had a few bottles of Lagunitas IPA in the fridge, left from a friend's visit recently. That part of my choice was easy. Now for the cigar. After a few scans of the humidor I settled on a Black Label Trading Company Last Rites. 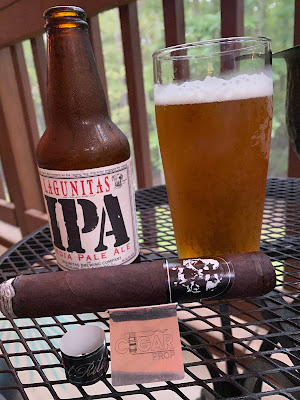 Lagunitas IPA pours a golden amber with a frothy white head. The aroma is citrus and pine. The flavor profile has robust citrus and pine hop notes, with a caramel malt backbone. The sweet malt and bitter hop aspects are in good balance. There's a lingering bitterness in the oily finish. This is a not a palate killer, but still highly flavorful.

I felt confident about the cigar choice, having enjoyed many Last Rites previously. The 6" x 60 Toro features a slightly oily Ecuadorian Habano wrapper, over a Honduran binder with Honduran and Nicaraguan fillers. The full body smoke has notes of creamy chocolate, coffee, and cedar throughout.

The bold, mildly spicy cigar cuts through the piney bitterness of the beer very well. At the same time the bold hop flavor of the beer isn't lost in the smoke either. I was very pleased with my selections for this flavorful pairing.