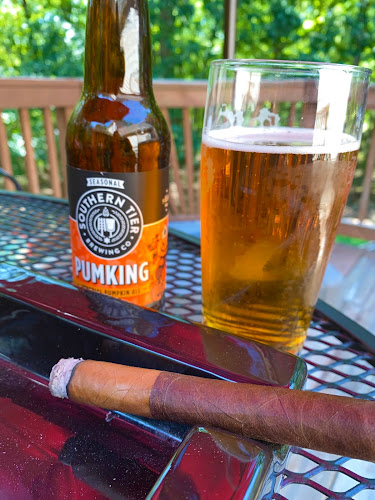 Southern Tier Pumking is one of the few fall pumpkin beers I enjoy. I can even pour more than one in a sitting. Made with actual pumpkins, the beer has a smooth malt and pumpkin gourd flavor. So many so-called pumpkin beers, are little more than brews loaded up with cinnamon, nutmeg, and allspice. The beer pours a hazy amber color with a thin white head. There's some spice to be sure, but the predominate flavors are graham crackers, caramel, and pumpkin. The 8.6% ABV is almost imperceptible. The beer was enjoyed only slightly chilled as we had just picked up the four pack a few hours earlier in the day.
The RoMa Craft CRAFT 2020 is a smoke I've mentioned in the past. I'm halfway through the box of ten, and still enjoying them. The annual CRAFT series features various combinations of Connecticut Broadleaf and Ecuadorian Connecticut wrappers featuring Mexican San Andrés accents, and also American Broadleaf and Ecuadorian Habano wrappers decorated with Ecuadorian Connecticut leaf. The 5¾" x 46 corona gorda is a great vitola that burns evenly and feels good in the hand.
Four days of pleasant weather, good food, good drink, and good cigars made for a remarkable, if too short, break.
Mused by David