It was raining lightly but steadily during my drive to the Cavalier Range for Saturday's monthly IDPA match. Despite the weather prognosticators indicating the rain would have stopped by the time I left the house, I was hopeful I'd be shooting in clear skies shortly. The mist was still falling as we gathered, and everyone lamented the sight of plastic bag covered targets. However, the match directors opted to delay the start for 30 minutes or so to let the rain pass. Success! We'd be shooting at un-bagged targets!

The first stage our squad shot had the longest shots of the match; quite the warm up. Three groups of targets were engaged in priority, near to far. All arrays featured a non-threat centered on the group. Two arrays of three had a target hidden being the non-threat, the furthest group was just two partial targets.

The amount of movement needed along the fault line depended on the shooter's confidence level with tight shots near the non-threats. Technically, I think you could "see" all the targets from just two positions, although every shooter I watched took a few more steps back and forth. To my surprise, this was my best stage. Despite shooting it down 5, it was a stage win in my division and a 3rd overall finish.

The next course of fire had us starting with just six rounds in the gun. Beginning the run facing a wall, there was an open target, and two targets engaged from cover. Successfully making all six of those shots meant you could reload on the move to the last point of cover to find the last two targets. I was -3 for the run. 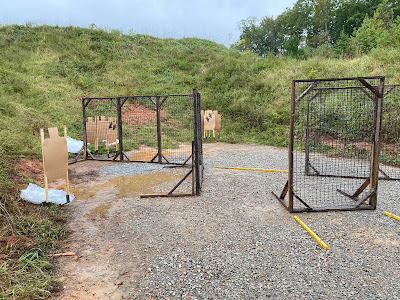 The next stage also featured a downloaded start, this time with just one round loaded in the gun. We started with the muzzle of the gun pointed at a spot on a non-threat in front of us. At the signal we were required to fire the one round at our choice of two open targets before retreating to cover and reloading. We then engaged those two open targets from cover. The rest of the targets on the stage were visible from two further points of cover. All targets required three hits each. This was a -0 stage for me. 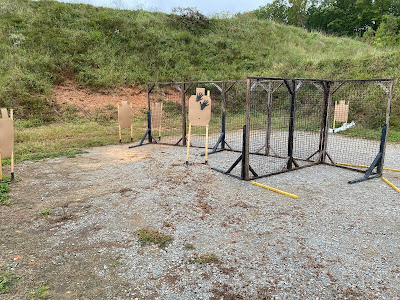 Next up was the "go fast" stage. We started centered on a wall, with an open target to our right which was shot first. There were five more targets arranged behind the wall, and it was the shooters choice from which side to shoot from first. Target priority meant there were three targets to be engaged from whichever side you started on, and two from the other. 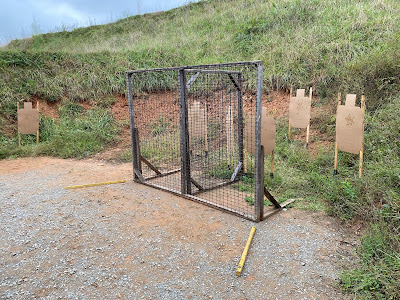 Even though each target required just two shots minimum, I think most shooters fired extra rounds, really fast, to enable reloading while in transition. I was -1 for the stage despite extra shots.

The last stage was a long field course with seven targets, some with non-threat cover. We started touching one end of a wall. The first shots were at two targets at opposite sides of the course, but shot from the same point of cover. We then worked our way down a "hallway" engaging targets from different nooks and angles. It was a good "running" course and I was -4 for the stage. 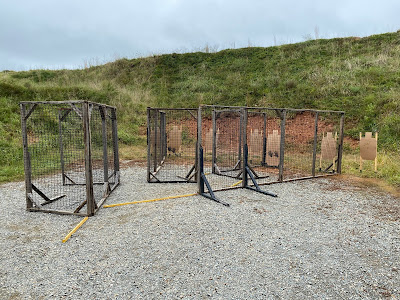 The weather turned out great, but there was still a fairly small turnout. The possible inclement weather, and ammo shortages, are likely contributing factors. There was also a competing VCDL special event at a nearby range that attracted some of the regulars.

It was a good day of shooting. I was moderately pleased with how I shot, even though I was 13 points down total. That had me finishing 9th of 32 overall, and 4th of 17 in SSP. Not bad for a slow, old guy. I'm not going to win any major awards, but it's nice to be somewhat competitive, despite bad knees and old eyes.  :-)  Now if I only had the range and the ammunition to put in some practice.