La Coalición and an Oktoberfest

My employer treated us to a four day weekend this holiday, so after a fun Friday afternoon spent driving country roads, just to get out of the house, I settled out to the screen porch for a beer and cigar. After a beautiful morning and afternoon, a storm was approaching but I was hopeful it wouldn't be too intense.
I grabbed a bottle of Blue Mountain 13.Five Oktoberfest to enjoy with the smoke. The beer pours a clear amber with just a wisp of head. The aroma is sweet with notes of caramel and bread. As expected the flavor is sweet malt and caramel, with just a touch of bitterness. It's a relatively light flavor profile with a thin mouthfeel. The beer was enjoyable, but lacking the heft that I personally prefer in a Märzen style beer. However, I won't pass by the rest of the six pack either. 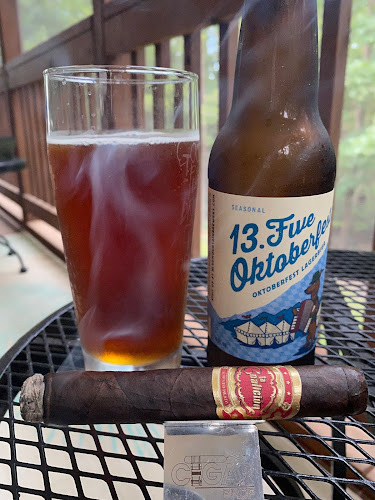 In contrast to the beer, Crowned Heads La Coalición is a full-bodied smoke. This is one I've been looking to try for a while, but just never got around to picking it up. This 5½" x 50 Gordito was part of the August pack from My Cigar Pack and I was excited to finally try it. I got rich notes of chocolate, espresso, cedar, and a touch of pepper throughout the 90 minute smoke. The stick burned evenly producing copious smoke, although it did threaten to go out and need a touch from the torch a couple times. I was not at all disappointed in the cigar, though next time I think I'll pair it with a strong stout or a bourbon.
Eventually the skies darkened and that storm came through. The rain fell and the wind blew hard. I actually had to move away from the screen to stay out of the rain being forced through. It was a short burst of weather activity, and in a short while I was back in my normal seat enjoying the cool air and the return of blue sky.
Mused by David