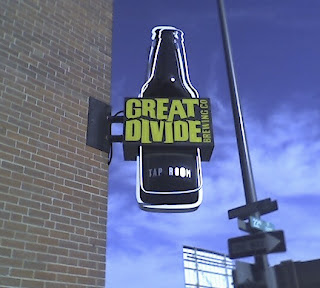 Tonight I had my 150th new beer of 2007. I wasn't looking for this "milepost" but a few weeks ago I realized I was getting close to 150 so I decided to watch for it. I've only counted beers where I had a full "serving". This number doesn't include brewery samples, such as the dozen or so we had at Boulder Beer this summer. Not sure if there's any significance to this milepost, but it's cool to think about.

The beer that made the 150 spot is Great Divide Hibernation Ale. I enjoyed this at the Tap Room at the Great Divide Brewery. This American Strong Ale was very easy to drink. I suspect the alcohol (8.10% ABV) could sneak up on you very easily if you aren't careful. I stopped after one. :-) The malt flavor was very well balanced against the hop background. I preferred this over the Odell Extra Special Red Ale I had last night.

I also had the privilege of having the very last tasting of the Belgian Hibernation before the keg ran dry. Patrick who runs the Great Divide Tap Room said this was a special version of Hibernation brewed with the Hades yeast. (Hades Ale is Great Divide's Belgian Strong Pale Ale.) I also picked up some Fresh Hop Ale to bring home.

From the "It's a Small World Department", I struck up a conversation at the Tap Room with a couple visiting from Harrisonburg, VA who were were doing a walking tour of downtown Denver breweries. At one point there were three people in the Tasting Room, and all were visiting from Virginia. Another couple came in before I left, but the place was pretty empty while I was there. Perhaps Denver is all 'beered out' from last week. :-)