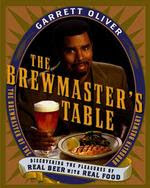 I suspect The Brewmaster's Table by Garrett Oliver might just be the best book on beer and food ever written. Perhaps even the best book on beer, period. If anything it's a very enjoyable read. Garrett is the brewmaster at the Brooklyn Brewery. Interestingly, Garrett writes in the book that Brooklyn's Black Chocolate Stout was his resume for getting hired at the Brooklyn Brewery. This beer happens to be one of my favorite beers. I'm looking forward to this winter's release.

Reading the book, one begins to feel he knows the author personally. Garrett goes to great length to accurately describe his beer and food dining experiences; not just the food and beer, but the atmosphere and settings where he had those experiences. Each chapter goes into depth about a style of beer. Next the food pairings for the style are discussed. After that, "Notable Producers" of the beers are listed. The author's personal experiences are also recounted. Garrett covers not only the "classics" but many pages are devoted to the "modern" beers coming from today's brewers, especially those in the U.S.

The book might also be described as a travelogue. The reader gets to know the breweries and the people behind them. The book is full of the histories of breweries as well. The author has been fortunate enough to get to know the people who run breweries around the world and shares those experiences.

I refer to this book frequently when deciding on a beer to have with a meal. Given time I intend to also read it again cover to cover. I suggest you do the same.