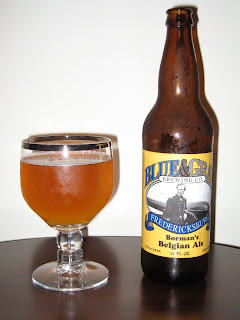 This is a surprise new offering from the Blue & Gray Brewing Co. In his recent email update Jeff writes:

We also brewed a Belgian Ale a while back, but didn’t tell anyone. You’re among the first to know about Borman’s Belgian Ale. – Rear Admiral John A.B. Dahlgren’s cannon used a fuse designed by Belgian Artillery Colonel Borman. The bang from this fine Belgian-style blonde ale comes from the strong Belgian ale yeast. It contributes spice and pepper notes, resulting in a crisp, clean, refreshing blonde beer with a rich and surprising flavor. Extended cold aging provides a superior smoothness.

I was out of town for the release day but picked up a couple of bottles at the brewery this week. (I also picked up some Temporary Insanity Stout, but that's a tale for another day.) This Belgian Pale Ale pours a golden orange. There's very little head although there's enough carbonation to give some tingle on the tongue. It exhibits an appealing yeasty smell. The mouth feel is slightly yeasty, but not unpleasant. A spicy, fruity flavor with hint of clove. I detected a bit of apple as the beer warmed. There's enough hop to give it just a bit of kick.

The folks at Blue & Gray did a good job on this one. It's exciting to see a new beer from our local brewery.