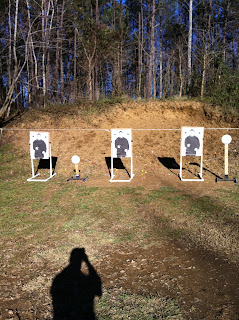 While Black Friday shoppers were out assaulting each other and the useful idiots of the "Occupy" movement were making plans to harass shoppers, we avoided the malls and headed out to the gun range.

I expected a crowd to be at the range, and I had mixed feelings about seeing cars at all the shooting areas. It meant that lots of folks had decided to occupy the range and not the mall. But it also meant we might have to wait. We even ran into a few friends at the gate who were heading to the skeet range. As it turned out we timed our arrival just as a group was packing up to leave on of the pistol bays. We set up our steel and paper targets and began our fun. I keep four or five different paper target styles with the range gear, just to mixed things up a bit —USPSA, silhouette, color patterns, realistic, etc. I had recently purchased some "hostage profile" targets so we put them on the stands for a while too as a fun way to add a little pressure to the shooting. Of course we took turns shooting the steel at 25 yards too.

As I've noted in the past, we like to mix things up by shooting lots of different drills. One of the fun things our group does on occasion is to have one shooter walk in random directions around the bay carrying an object. When the buzzer, also random, goes off the shooter has to drop what he is carrying shoot from that spot. We usually require hits on two or three targets. You're not allowed to top off the mag before you start either, so there's the unexpected reload added in too!

Before we knew it, we'd each fired a couple hundred rounds and other shooters were waiting their turn. It was time to pack up the gear, police our brass, and head home to get ready for an evening on the town. Occupying the range was a great way to spend an afternoon, and was apparently much safer than being in the malls!