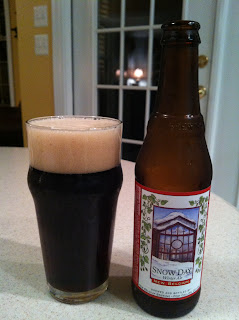 This one one of the "impulse buys" from our recent beer shopping trip. New Belgium Snow Day Winter Ale is just one of the many beers from the Colorado brewery that are starting to make appearances in Virginia. I'm impressed, and appreciative, that New Belgium doesn't appear to be holding back in making themselves seen in the state. As an aside, just a couple weeks ago I was at a party where there was a keg of New Belgium's flagship beer, Fat Tire, and enjoyed it very much.

Snow Day pours a very dark brown with a thick, long-lasting tan head. The aroma has slightly smoky, caramel malts with piney hop hints. The taste begins with the smokey, roasted malt flavors, followed by the bitter pine hops. Mild citrus notes longer at the finish. Or wait, does the citrus hit first, followed by the roasted bitterness? As we sipped this one we debated which flavors were prominent. They're all there in a very tasty beer. The mouthfeel is creamy and mildly carbonated.

When we saw the 12-packs of Snow Day Winter Ale at the store, I initially hesitated over buying an unfamiliar beer. But I've always enjoyed New Belgium beers when I traveled to Colorado so I figured it was a safe bet. After trying the beer, I'm glad we decided to chance it. I don't suspect those 12 bottles will hang around long.