Thursday evening, Capital Ale House dedicated 10 of its tap lines to beers from Blue Mountain Brewery. I headed over after work, and since my family was off on a day trip, I hung around for several hours enjoying the opportunity to try a few new beers. 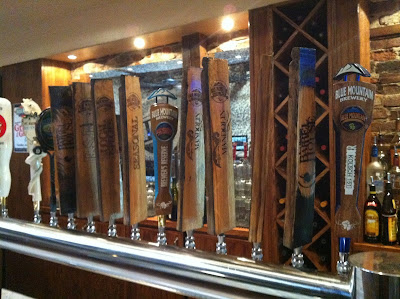 My first selection was the Steel Wheels ESB. ESB is a style I'm particularly fond of, but not one that's commonly brewed by a lot of breweries. Blue Mountain's version is dark caramel in color with a thin head. The flavor is predominately sweet, caramel malt. I also picked up some faint bitter chocolate lurking in the background. The finish was dry. I enjoyed this one quite a bit.

Next up was one of the barrel-aged selections from the Blue Mountain Barrel House. Local Species is a Belgian-style Pale Ale. The reddish-amber beer had a thin white head, and was, in my opinion, served much to cold. I grabbed the snifter to have a sip and was shocked by the chill on the glass. I let it sit for a few minutes to warm a bit. The aroma was fruity with hints of yeast and lemon. My first sip evoked a "Oooh" exclamation, followed by an immediate second sip. I would enjoy this one I could tell right off. The taste was a flavorful blend of grapefruit citrus and funky yeast. Some bourbon notes came through at the end. The slightly sticky finish left a bit of lemon tartness behind. 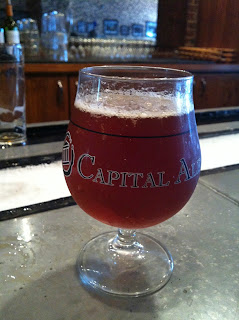 Now I had a decision to make. Do I order another glass of the tasty Local Species, or do I continue my exploration with a different beer? I opted to try another Barrel House selection, the ÜberPils Imperial Pilsener. The bright, straw-colored beer had a strong grassy, sweet aroma. The taste is predominately sharp grain with a touch of bitter citrus. The alcohol warmth is noticeable and not masked. I've had a couple of these "Imperial Pilsner" style beers, and I must admit, I just don't get them. They take the crisp, sharp flavors of the Pilsner and add in a very noticeable alcohol aspect. There's just not enough to the base beer to cover that addition. I do enjoy a good alcohol "burn, when matched with a strongly-flavored beer, but in a pilsner it becomes medicinal tasting to me.

I did order one of Capital Ale House's giant Bavarian pretzels with spicy mustard to go along with Pilsner. The brown mustard certainly cleared off the alcohol notes of the ÜberPils.

Finally, I opted to end my stay with a glass of one of the brewery's flagship beers, Full Nelson Pale Ale. Although I've enjoyed this one frequently, I wanted something more moderate in ABV, but flavorful enough to stand up to the spicy mustard as I finished off my pretzel appetizer.  The mild citrus and fruit aromas, belied the citrus and bitter hops to follow in the flavor.

The evening proved to be an enjoyable mid-week diversion. I've made a mental note to find and enjoy again, Blue Mountain Local Species, which was the beer highlight of my visit. A surprise of the evening came when I looked over to see who had sat down at the bar a couple seats over from me. It was a cross-country teammate from college, who I had not talked to in at least 30 years! We had a good time chatting and catching up. It turns out he's a regular at Capital Ale House, and we share similar tastes in beer, and politics.

I only got through four of the 10 beers being featured. But I did have to get home at some point!