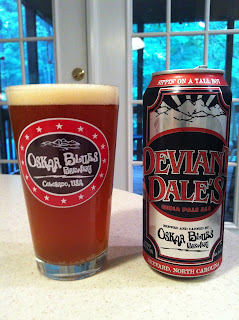 It seems we're on a bit of a Colorado beer memory tour. To that end, I enjoyed a pint of Oskar Blues Deviant Dale's IPA the other evening. I first had this amped up version of the brewery's iconic Dale's Pale Ale at Oskar Blues in Longmont last year. At the time, the beer hadn't yet made it to Virginia. However, it appears the new Virginia brewery has helped improve that distribution limitation.

Deviant Dale's pours a thick looking dark orange with creamy head. The foam is long lasting, leaving a sticking coating behind on the sides of the glass. The aroma is strong with sweet malt and a hint of fruitiness. The flavor is a mix of bitter and sweet, with the sweet malts being the predominant aspect. The pine and citrus hops help to provide balance, but this IPA leans to the sweet rather than citrus. An oily, resinous coating of sweet malt lingers in the mouth afterwards.

I couldn't help but contrast Deviant Dale's with my old Colorado favorite, Great Divide Hercules. The Hercules focus is on the bitter citrus, with the sweeter flavors providing a supporting role. Two beers, two interpretations. At 8% ABV, Deviant Dale's isn't as extreme as some India Pale Ale's, but it's still worthy of respectful sipping.

My beer didn't have to travel far to get to Virginia. The 16 ounce "tall boy" can (How cool is that?) prominently notes the Brevard, North Carolina point of origin. Turning the can over to get the last drops into my glass, I noticed the April 1 canning date, complete with an April Fool's Day joke. 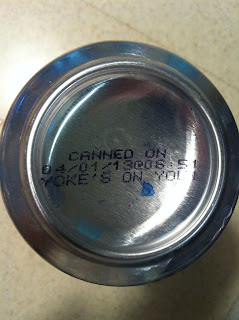