One of the limitations at my local range is that all targets must be placed at the base of the berm. This rule means that although we can shoot from any distance from 0 to 25 yards, all the targets must be set along the same line. It makes it impossible to set up distance change up drills. The other day I was lamenting this restriction, and suddenly hit me, "I can do this! Or at least fake it well enough."

A while back I posted about some 1/4 scale USPSA targets I had purchased for dry fire. After I cleared out a little more room in the basement I switched to full size targets, and forgot about the small ones. Recently I took the small targets to the range to do some experimenting.

I set up a couple of standard USPSA targets, and the 1/4 scale targets, at the berm as required. The two full size targets were set close to each other, while I set up a wider swing to the "distant" target. In theory, standing at the 5 yard line will equal a 20 yard shot on the scaled down targets. Comparing the sight pictures between the real and scaled distances it appears to be a pretty close approximation. 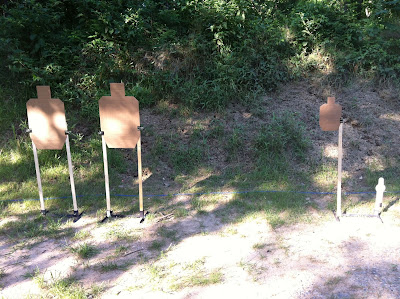 I started out drawing to put two shots on the fake "20 yard" target. Interestingly, I found myself getting a bunch of low C and D hits, just like I often do in long range targets in a match. I was aiming for "brown" when I should aim for "A." Moving back to the 20 yard line I did the same drill with the full size target and got the hits in about the same time as at the simulated distance. After spending some time working on the sight picture and trigger press to center the hits, I moved on to the distance change up exercises.

The rest of my time was spent doing a six shot drill — drawing and putting two shots on each target. Initially, I found myself shooting the small target much too quickly, with the expected results. Eventually I convinced myself that I had to slow down to get A zone hits, and not simply aim for anywhere on the reduced target. After a while I started to get better accuracy and faster times. It was such a good, and fun, exercise that I broke out the "emergency" box of ammo I keep on hand so I could shoot even more.

Sure, I could approximate the same drills by cutting out the A zone of a standard target and use it as the distant target. Or use any style of smaller targets. Or cover part of the target with a no-shoot or hard cover target, which I've also done. However, I did like having the sight picture of the full target at a distance. It gave a good representation of the situation seen often in matches. And it was fun. A compromise for sure, but given the limitations of the range, a good semblance of the real thing.

Add in a few walls and I think I can come up with some interesting "fake" stages...