After what seems like weeks of non-stop rain, the skies finally cleared in time for the Saturday morning fun match at the Cedar Mountain Youths range. Due to the spate of poor weather and other commitments it's been a couple weeks since I was able to get behind the gun so I was really looking forward to some trigger time.

Requiring just 87 rounds over six stages, the match offered a variety of challenges. The first stage I shot was fairly straightforward; two paper targets and a falling popper, followed by two more paper targets, and a popper that fell to reveal a small steel plate. The poppers at Cedar Mountain fall forward, and they are slow to start moving. You have to call your shot because waiting for the steel to start moving will eat up precious time. 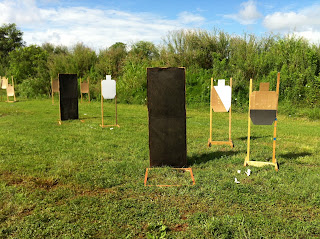 The next stage consisted of three groups of targets shot from three positions. Pretty straightforward, except for the no-shoot covering more than half of the A-zone of one target! Next we moved on to a longer field course, but one with a twist. The shooter started seated and had to carry a large bucket into the free-fire zone. Before the last shot was taken the bucket had to be left at the center front of the course. Most of the paper and steel targets were required to be engaged thru small ports in the wall, requiring a bit of bobbing and side-stepping to see them all. This was probably my favorite stage of the match.

Another interesting stage started with the unloaded gun laying on a table. At the start, the shooter grabbed the gun and loaded on the move to the firing area. The first array of targets were required to be engaged shooting below a stick extending from the wall and the middle array through a small port. These positions required most of us to bend over or duck at least a little. The last array of targets were engaged while shooting under an even lower bar, ending the course in a kneeling position. 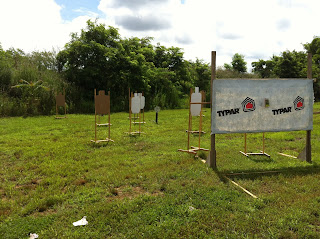 A stage with six targets set in a straight line, at various heights with hard cover and no-shoot cover, requiring one shot on each target from three positions, moving closer after each group, offered a "speed shoot" opportunity. The same speed and accuracy requirement came into play on our final stage, a simple plate rack with five 8" and one 6" plate. The rules stated a mandatory reload sometime after the first shot and before the last shot. Combined with the smaller target thrown in, it gave a cadence-breaking twist to the standard plate rack.

Cedar Mountain holds theses monthly fun shoots as fundraisers for their youth programs. The events are a great opportunity to introduce new shooters to the sport in a relaxed, low-pressure atmosphere. Even the more experienced shooters will enjoy shooting some stage designs that might not be permitted in sanctioned or formal matches. I look at it as a good practice opportunity. But the best part of the day, for me, was finally getting out on the range and shooting!