We were passing through Frederick, Maryland on Sunday when I remembered the Western Maryland town was home to Brewer's Alley Restaurant & Brewery. This is a place I've been wanting to visit for some time, so we made an unplanned stop on our way back to Virginia. 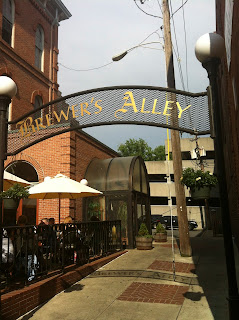 We arrived mid-afternoon and the bar area was quite crowded, but the dining room was nearly empty. An outside seating area had a number of folks enjoying the pleasant weather as well. Of course, our first order of business was deciding which of the house beers to try. We still had a 2 1/2 hour drive ahead of us so we were quite limited in how much we could experience. I decided on Brewer's Alley India Pale Ale, an English-style IPA. The beer was dark amber with a very thin head. The aroma was caramel malt with some floral hops. The flavor was a nice balance of sweet malt with both citrus and piney hops. Nothing overpowering, but still quite flavorful and enjoyable.

Colleen opted for the Gettysburg Wheat. This unfiltered wheat beer is brewed with peaches and lemon zest. The beer was brewed to commemorate 150th Anniversary of Battle of Gettysburg. The attractive amber-orange beer had an aroma of biscuity malt with a faint citrus fruit note. The typical wheat beer flavor was accented with a subtle peach flavor and a mild tartness. I enjoyed the sips I stole of Colleen's beer. 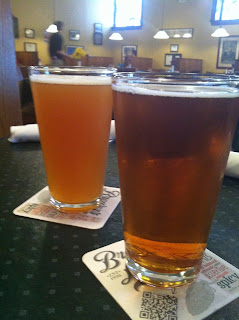 For the food portion of our meal we started out with the Brewer's Beef Nachos from the appetizer menu. This was a mountainous platter of Tortilla Chips, topped with Ground Beef, Cheddar-Jack Cheese, Pico de Gallo, Sour Cream and Shredded Iceberg Lettuce. The nachos were roasted, in the wood-fired pizza oven I suspect, to a nice brown with just the right amount of toasted edges. The dish was simple but quite tasty.

We weren't aware of how large the nachos "starter" would turn out to be, but we had already been tempted to also order the Apple Goat Cheese Wood-Fired Pizza. Fortunately we had opted for the "small" size. The menu description describes the pizza as "Gala Apples, Onion Marmalade, Garlic Butter, Proscuitto Ham, Goat Cheese and White Cheddar Cheese." The pizza appeared to have Granny Smith apples but given that's my favorite variety, it was fine. The pizza was very delicious, and our thoughts to take leftovers home were quickly forgotten.

We enjoyed our meal very much. The beers, the food, and the service were all excellent. I don't get out to Western Maryland very often, but when I do next, I'll try to make plans to enjoy even more of the good beers, and food, being served at Brewer's Alley.