On Saturday I headed over to the Walnut Ridge USPSA match held at Summit Point, WV. The match was fun, as always, with some interesting stages, as always. Six courses of fire, including a classifier stage, awaited us.

The first stage I shot was the classifier "Front Sight 2." It was a simple course of fire, with fairly open, and close targets. Should have been easy, right? I dropped my first shot of the match right into the no-shoot! Well, it could only get better from there! And it did, thankfully.

The next stage was a longer course that used most of the width of the bay. The shooter ran along the narrow free fire zone, engaging targets as they became visible. There was a long shot thrown in the middle, visible through a narrow opening which required the shooter to apply the breaks in the midst of otherwise quick course. I was happy with my hits on this fun stage, especially since I didn't let the previous stage get into my head!

One of my favorite setups of the day was fairly straightforward, but with plenty of leaning required to see all the targets. Four falling steel targets and two paper were engaged through a narrow center area, but not without some footwork adjustment. I enjoyed this one and I felt I got into my positions well, without having to send time hunting for my targets.The targets arrays at either end required a reaching lean to finish. In fact, there were several stages in the match that required a deep lean around a wall at the end. Often we saw shooters taking their last shots as they "fell" out of the shooting area. 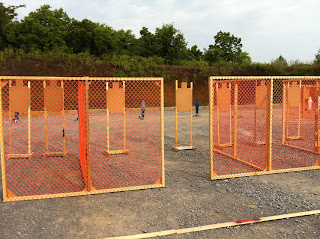 Another stage I found especially interesting was the sixth and final stage I shot. We started on the right side of the course of fire and moved left across the course. (Moving to the left is generally anathema to me, in life and shooting.) Most of the targets were visible while you were looking towards the right. If I could run backwards as fast as forwards I might have shot the stage while running backwards. The stage provided an extra challenge for right-handed shooters to make sure the gun didn't break 180 while reloading. It was fun to shoot the stage as it forced me out of my comfort zone of always trying to shoot left to right. I was pleased with my performance here too. 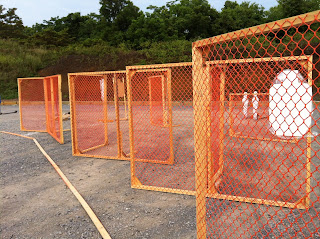 In fact, I was pretty happy with most of my shooting that day. There was that opening dropped shot on the Classifier, and too many misses on another stage, where some missed steel broke my concentration, and my plan. But otherwise, I walked away smiling from the rest of the stages. Well, truth be told, I smiled after all the stages. It's more fun that way. :-)

Near the end of the match we watched as some dark clouds move in, but fortunately no rain fell. I don't think the afternoon shooters were as fortunate though. My usually pleasurable drive back from West Virginia saw continuous, and often heavy rain falling. But all in all it was a very enjoyable day. The weather was pleasant, the people fun, and the shooting challenging.

Update: The match results have been posted. I had stage finishes running from 5th to 12th, with an overall finish of 7th out of 17 Production shooters. I'll take it. :-)