Downtown Fredericksburg that is. Deutschland Downtown is a soon-to-be-opened German restaurant in Old Town Fredericksburg. Even before they open, there's a strong local following as the proprietors have been running a mobile food cart, serving German fare locally for some time now. In fact, we've been anticipating the opening of this bier garden and restaurant for a couple years.

The past two weekends, Deutschland Downtown has been hosting a "soft opening," announced via their Facebook page, in order to help train the staff. On Saturday evening, Colleen and I eagerly stopped in. There was a crowd in the dining room when we arrived, and we took one of the last available tables. They were serving a limited menu, and also had three beers on draft. There was some wine listed too, but I paid it no mind.

The beer selection this evening included two imported German beers, Warsteiner Premium Verum, König Ludwig Weiss, and an American, but German-founded beer, Yuengling Lager. I started off with the Warsteiner, a German Pilsner, served in a proper, brewery labeled, Pilsner glass. A classic Pilsner, the light bodied beer had a mildly sweet, biscuity malt with a sharp, crisp and clean hop finish. It went down easily. With my meal I tried the König Ludwig Weiss. This beer was also served in a proper Hefeweizen glass, complete with the brewery logo. The aroma is banana and wheat, with a hint of citrus. The taste is a delightful balance of sweet honey, banana, and clove backed by a yeasty malt. The mouthfeel is creamy with a dry finish. I enjoyed this one quite a bit. I opted to skip the Yuengling. 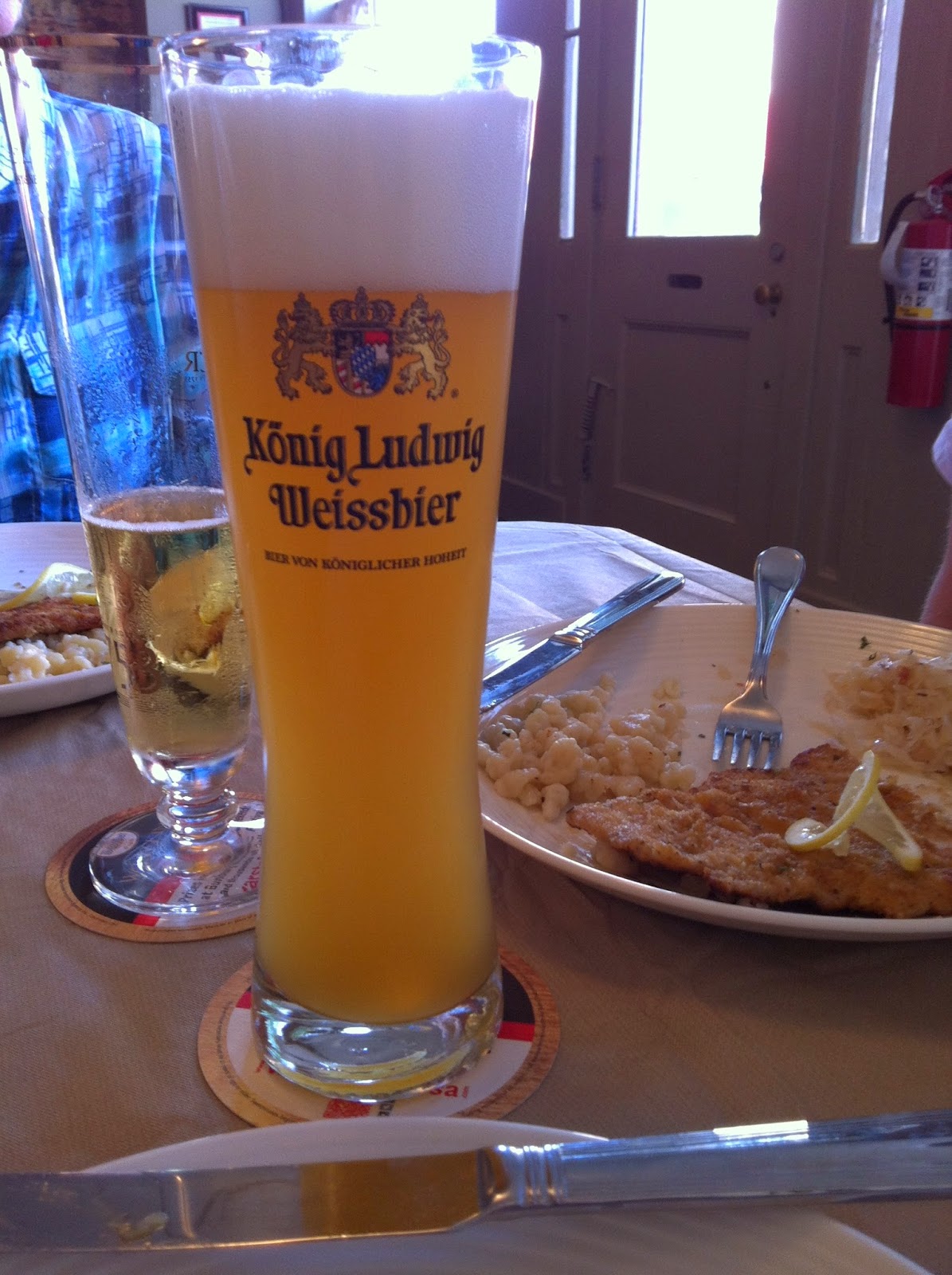 For our meal, Colleen selected Wiener Schnitzel, served with Sauerkraut and Spätzle. I went with the Currywurst, which was served with Sauerkraut. I didn't try anything off of Colleen's plate, but she was very impressed with her selection. She declared each dish "very good" repeatedly and was very impressed with the Schnitzel. I heard raves about the Schnitzel on the drive home, and regretted not stealing a bite. My sausage was very tasty, although it was missing the spicy ketchup-based sauce described in the menu. The crispy Sauerkraut was well done; not overly bitter, and mixed with tiny bits of sausage. I would have liked a side of Spätzle or perhaps German Potato Salad, to go along with the meal, but I enjoyed it nonetheless.

We also opted for a dessert of Apple Strudel, mine topped with a vanilla sauce, while Colleen had hers with hazelnut ice cream. Both provided a deliciously sweet finish to the meal.

We had a very enjoyable evening, doing our part to help the restaurant prepare for its opening. They have a few kinks, as expected, to work out in the service, but nothing that greatly detracted from our pre-opening dinner. The food was all quite tasty, and we're very much looking forward to experiencing the full menu. Hopefully, they will expand the German beers menu too. I predict Deutschland Downtown will be a popular addition to the Fredericksburg dining scene. And I expect I'll be raising a Maß or two in the outdoor biergarten soon.

Good news! According to a Sunday evening posting on Facebook, Deutschland Downtown will be open for business on Thursday of this week.