Though a couple days late for the 4th of July, but still on the holiday weekend, the Fredericksburg Practical Shooters match on Sunday, July 6 was a great way to celebrate our right to bear arms and have some fun at the same time. As I pulled into the range that morning, the dashboard thermometer read 59°. Fifty-nine degrees. In July. In Virginia. The temps eventually rose to near 90°, but the low humidity and a light breeze made for an unseasonably pleasant day. 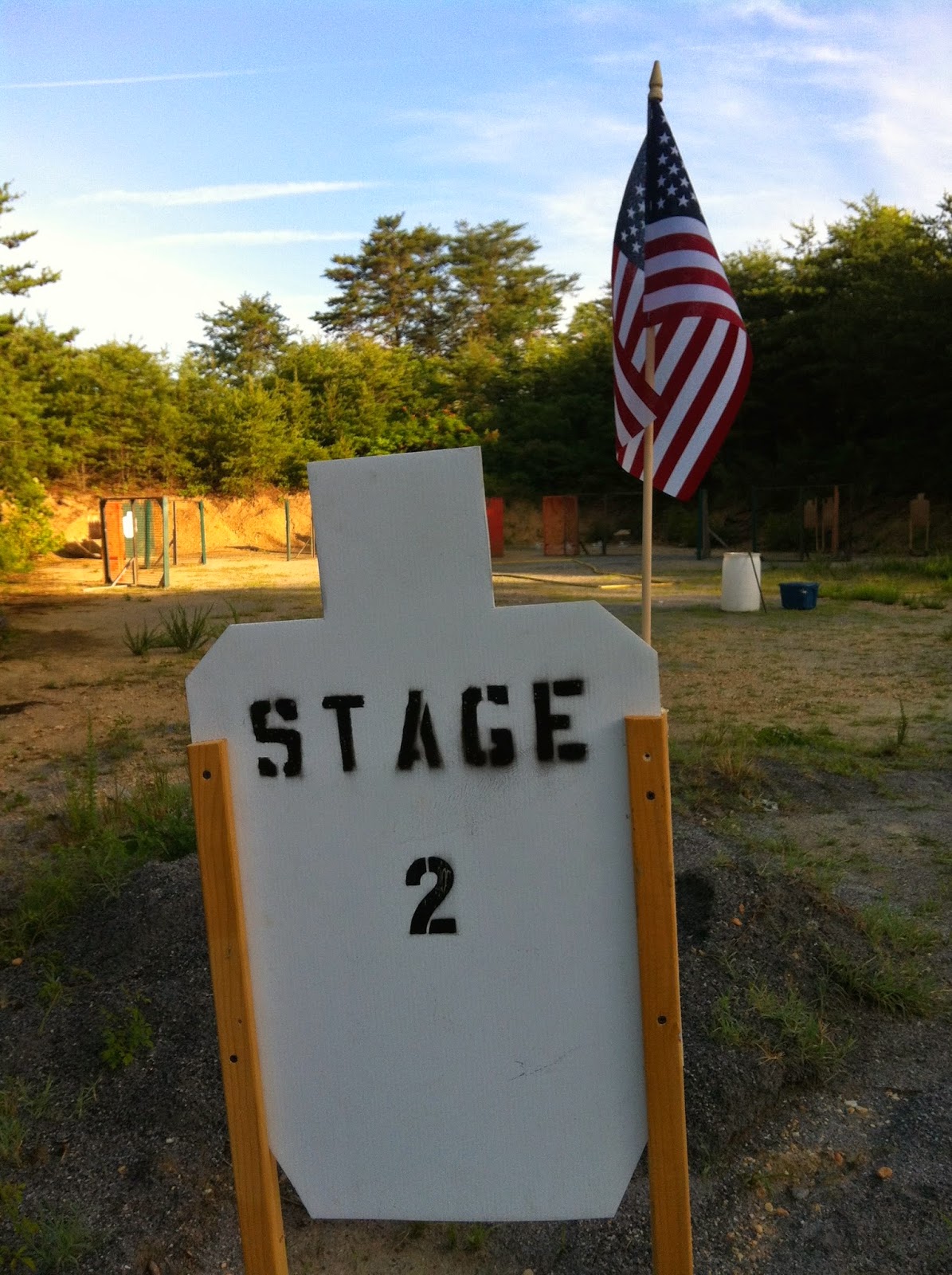 Our squad started on Stage 6, "Deja Vu All Over Again," which was a fairly straightforward course, and the only field course with no moving targets. It provided a good warmup for the rest of the day. Stage 7, "Yankee Doodle Dandy," started with an unloaded gun picked up from a barrel. Pushing through a swinging bar across the path released a swinging target. Further down the course, shooting a popper activated a drop turner and unlocked a door which the shooter pulled open to reveal the final targets. I forgot a reload and ended the stage with an empty gun, but fortunately no makeup shots were needed. It was a quick and fun stage, and also my highest stage finish at 5th of 30. (First person video here.) 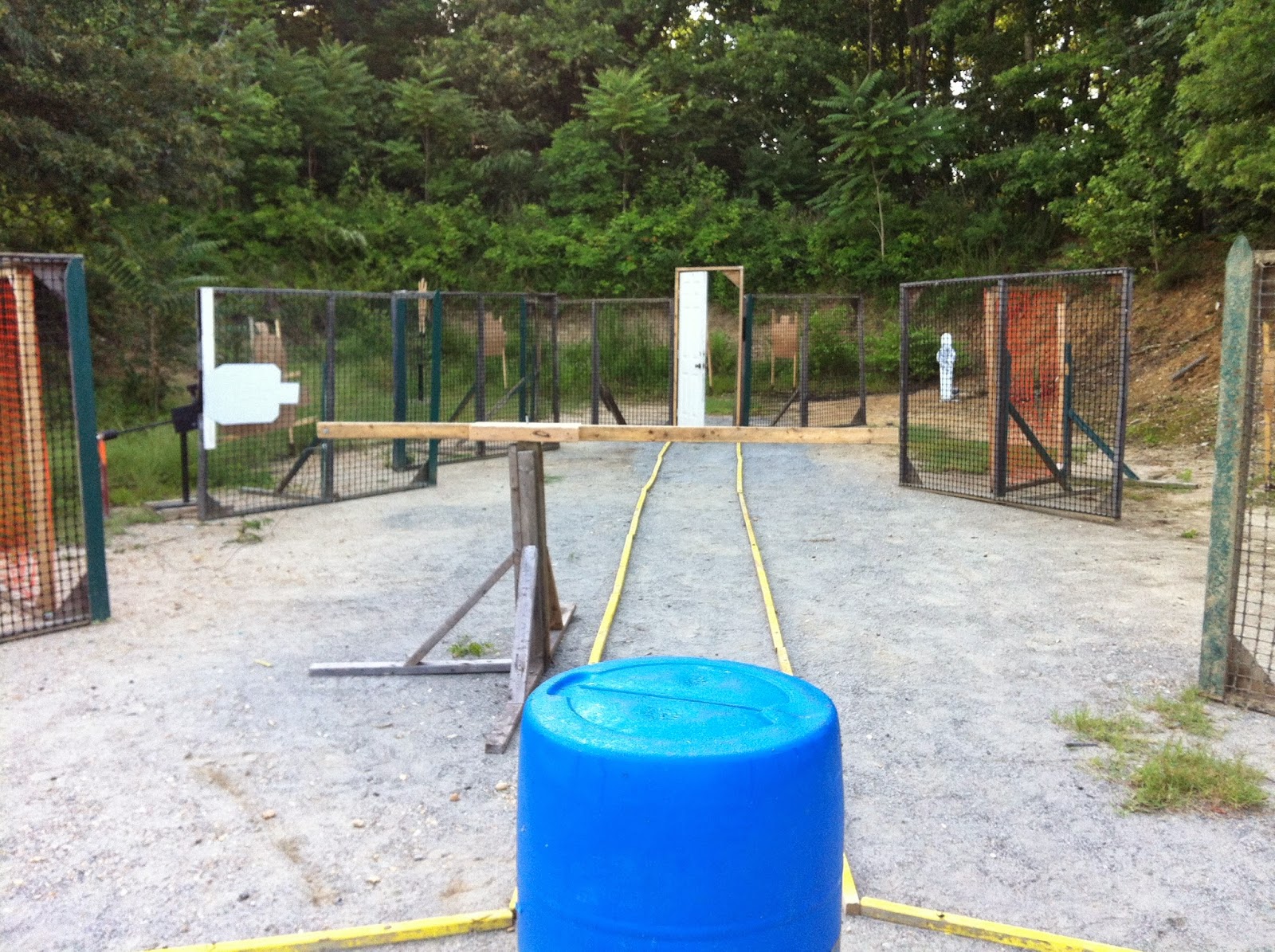 Stage 1, "Down And Dirty" was a very interesting, and challenging, stage. There were two arrays of three targets that were exposed by pulling on a cable. The shooter had to hold the heavy targets up while shooting them, which meant shooting strong or weak hand-only. There was also a stomp plate that activated an upside down target swinging in an opening. The habit of shooting at the top half of the target would lead to D hits instead of C. (It also led to some double-takes from the ROs when scoring.) I didn't finish well on this stage but had a big grin on my face after shooting it. (Video here.) 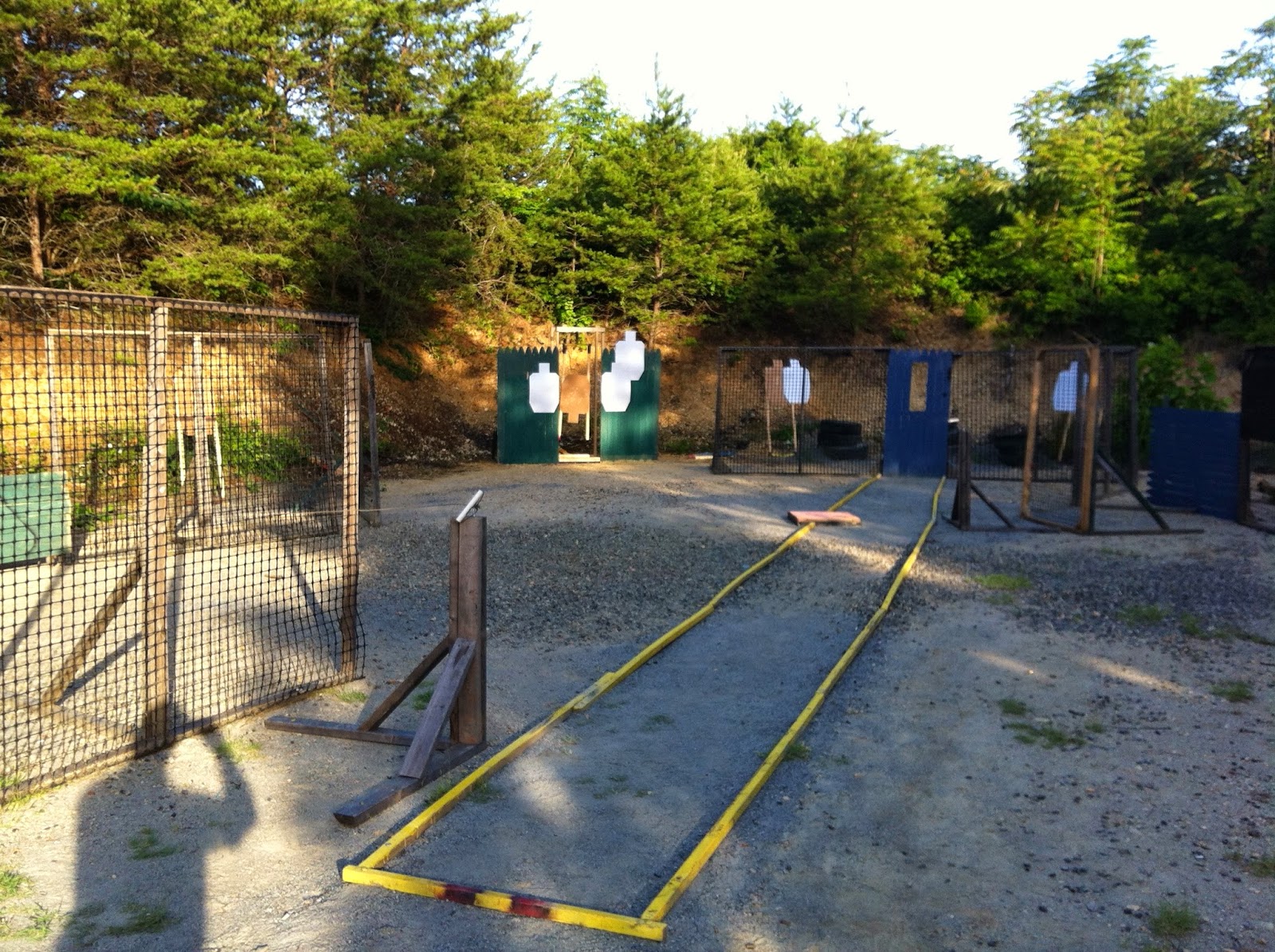 "Fast and Furious" included six steel poppers, one of which activated a clamshell target, which in turn activated a swinger. Due to some prematurely pasted targets I got a reshoot on this stage. I strayed from my plan slightly on the second run, but still managed a 7th place finish. Stage 3, called "Over the River," began with some long shots on paper and steel, followed by a quick sprint down an L-shaped path. The stage ended with some closer targets, and a swinger activated by another push bar across the path. Some overly fast shooting on the short range targets earned me a couple of D hits but I still managed a 6th place finish on the stage. (Video here.)

Next up was the classifier stage, "Triple Choice," CM99-47. Shot from just 25 feet, the five targets had varying degrees of hard cover, and required three strings of fire; free style, strong hand only, and weak hand only. I had two hits on hard cover, i.e. misses, so no classification boost this time.

The final stage we shot, "Prison Break," included three ports to shoot through, and those ports were obstructed by wooden "bars." The second port had an array of three steel poppers, one of which activated a three target swinger in another barred window that randomly moved two no-shoots in front of the other targets. Taking an extra shot on a target gave me an empty gun at one point, which was followed by a jam, costing me valuable seconds lost to remedial action. Despite that I was pleased that I managed to get into position well to see the various targets through the bars. 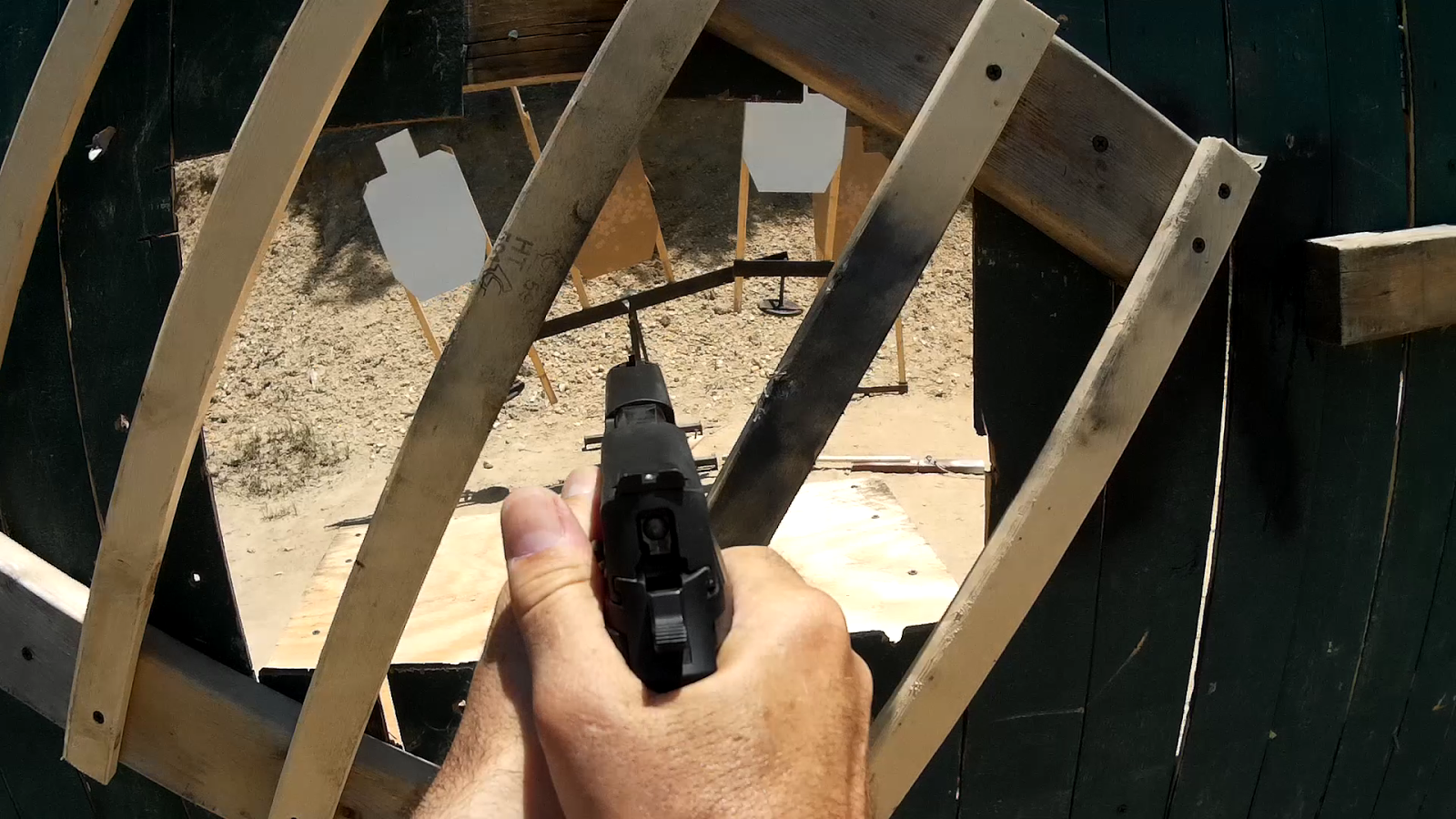 Overall, I was quite happy with my shooting on this day. The D hits hurt, and I consider D's to be the same as a miss. The classifier stage and the issues on the last stage notwithstanding, I finished 9th out of 30 in Production, and that field included two Grand Masters. But more importantly, I was felt good about my course execution and movement throughout the day. I've set up a small "field course" in my basement and have been working on target transitions, as well as movement and arriving in position ready to shoot. There's still much that can be improved upon, but was good to see the apparent payoff of those practice hours.

After six hours of standing and walking, interspersed with short sprints through a course of fire, I was bushed. Getting old ain't fun, but those aches and pains are evidence of a great time. All in all, this was a fantastic match. The courses of fire were very interesting and fun to shoot. Kudos to match directors Alan and Clay for coming up with some challenging stages that offered a lot of variety. I think I would actually rank this as one of my favorite days at Fredericksburg. Interesting stages and great weather, what's not to love?