Friday Evening we made the trek to Washington, DC to take in the Evening Parade at Marine Barracks Washington. The Barracks, known also as "8th and I" are rich in history and tradition, and is called "the oldest Post of the Corps." But before we could enjoy the pageantry of the parade, we had to get there! Traveling up I-95 on a Friday evening, is an adventure to put it mildly. We finally arrived at a Northern Virginia Metro station and took the subway the rest of the way into the city.

Our first stop was for dinner and a beer at Molly Malone's, located right across the street from the Barracks. We've gone to the Evening Parade several times, and dinner at Molly Malone's has become part of our "tradition." The Irish pub fare is served quickly and is quite tasty. The beer menu is decent too. On this evening, they listed Heavy Seas Loose Cannon Hop³ IPA. This is one of my longtime favorite beers, but one that I've not had on draft in several years. I was happy to enjoy it again. It was as "juicy" and as hoppy as I remembered. My glass was nearly empty when my Fish and Chips arrived, so I treated myself to a second round with the meal.

After dinner we crossed the street to the Marine Barracks. The Evening Parade includes appearances by the U.S. Marine Band and the U.S. Marine Drum and Bugle Corps. Alpha and Bravo Companies, which make up the ceremonial infantry units of Marine Barracks Washington are present as well. Alpha Company includes the Marine Silent Drill Platoon. The silence of the audience during the Silent Drill Platoon's performance is almost as amazing as the drill team itself. Our seats this year were at the top of the bleachers, near the center, so we had a good view of the parade grounds, as is shown in Colleen's photos.

As opposed to previous years, the temperature and humidity was moderate, and a slight breeze made its presence known on occasion. The full moon rising up behind the Barrack's flag pole, added a special feeling to the evening. As an aside, that flag pole flies the flag of our Nation as it appeared from 1795-1818, with 15 Stars and 15 Stripes. Ft McHenry, Maryland is the only other location authorized to fly this flag, which inspired our National Anthem. The pageantry, precision, and Esprit du Corps of the Marine Evening Parade is a sight to behold. 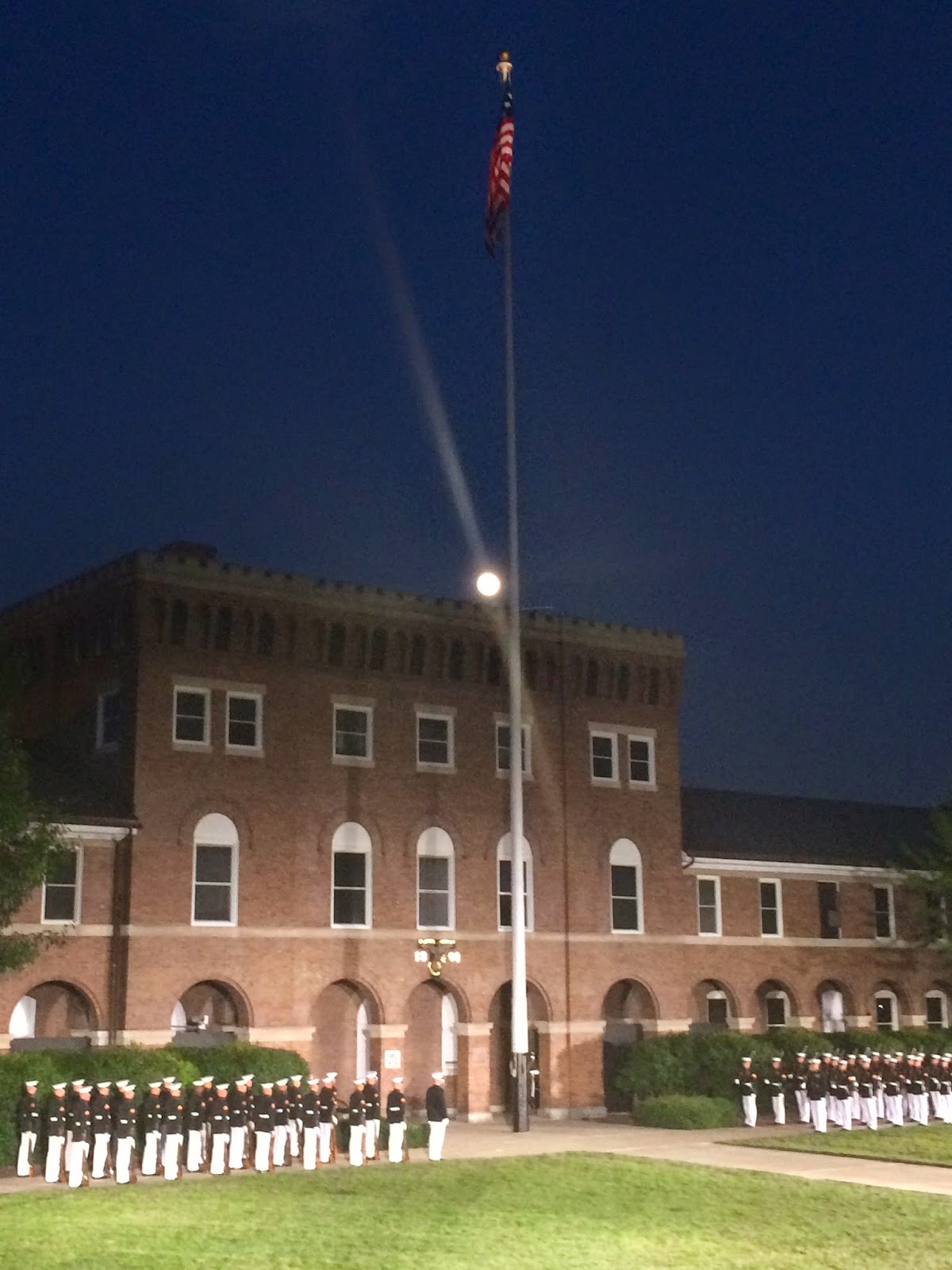 Soon we were back on the Metro, heading to our car for the drive south on I-95. And what a drive it was. The never-ending construction would affect the trip home even more so than during the drive up. After spending some 30 minutes getting from three lanes down to one, we passed the paving work and the road opened back to three lanes. Only to stop again just a few miles later in order for traffic to be once again constricted down to one lane. That process took another 40 minutes. Why there is no one working for VDOT who has the common sense to keep the traffic in one lane through the entire construction zone is beyond me. Once we were in one lane, the traffic flowed below the speed limit, but it moved, and that would have been preferable to the repeated merge delays.

We finally arrived home some four hours after the parade. I had plans to be up early the next morning to go to a practice match at the Cedar Mountain Youths range. That practice session would definitely be affected by my lack of sleep. Despite the long trip, it was a fun time with good food, good beer, and an exciting ceremony. I'm sure we'll do it again.