I went to Maryland. With a gun. On purpose. I've been hearing good things about the USPSA match put on by the Southern Maryland Practical Shooters in Lexington Park. Despite an already busy weekend, I made the trip across the Potomac on Sunday morning to shoot this match.

The match is held at Sanner's Lake Sportman Club. The match was set up on the static pistol range and in the club's "IDPA bays." In order to keep the match duration down, given the Summer temperatures, the organizers set up three short Classifier stages and three fun field courses. The bays used at Sanner's Lake are small, which limits the length of the courses. However, the course designers make up for that by making use of copious blue barrels and no-shoot targets to limit sight lines and create some tight shots. Those tight shots combined with "up close and personal" targets, forces one to watch speed, and the front sight. 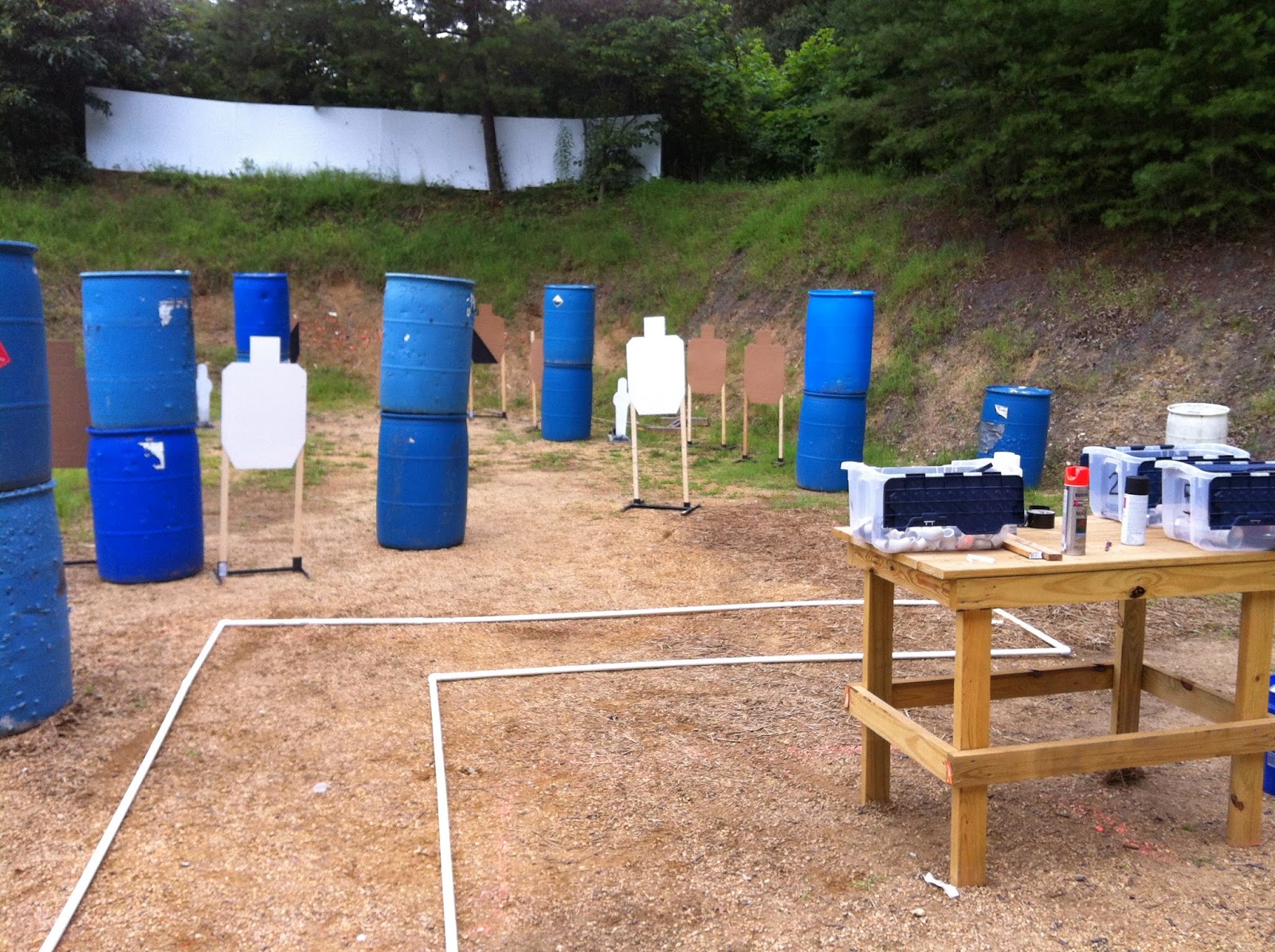 I succumbed to those tight shots on the first stage, "Steely Fields." The short, L-shaped course started off with an extremely close target at starting position. The course finished with movement across the bay shooting both paper targets and steel poppers. The short course was also a bit of a memory stage. Going too fast cost me a couple of misses and even a hit on a no-shoot. Okay, time to settle down.

Next up was "Tunnel Vision." This was another L-shaped course, this time run from front to back of the bay. Again the targets were placed amongst barrel stacks that limited from where they could be engaged. I ran this one much better, with 16 A's and 2 C's, plus the steel, even though my time was purposefully slow. 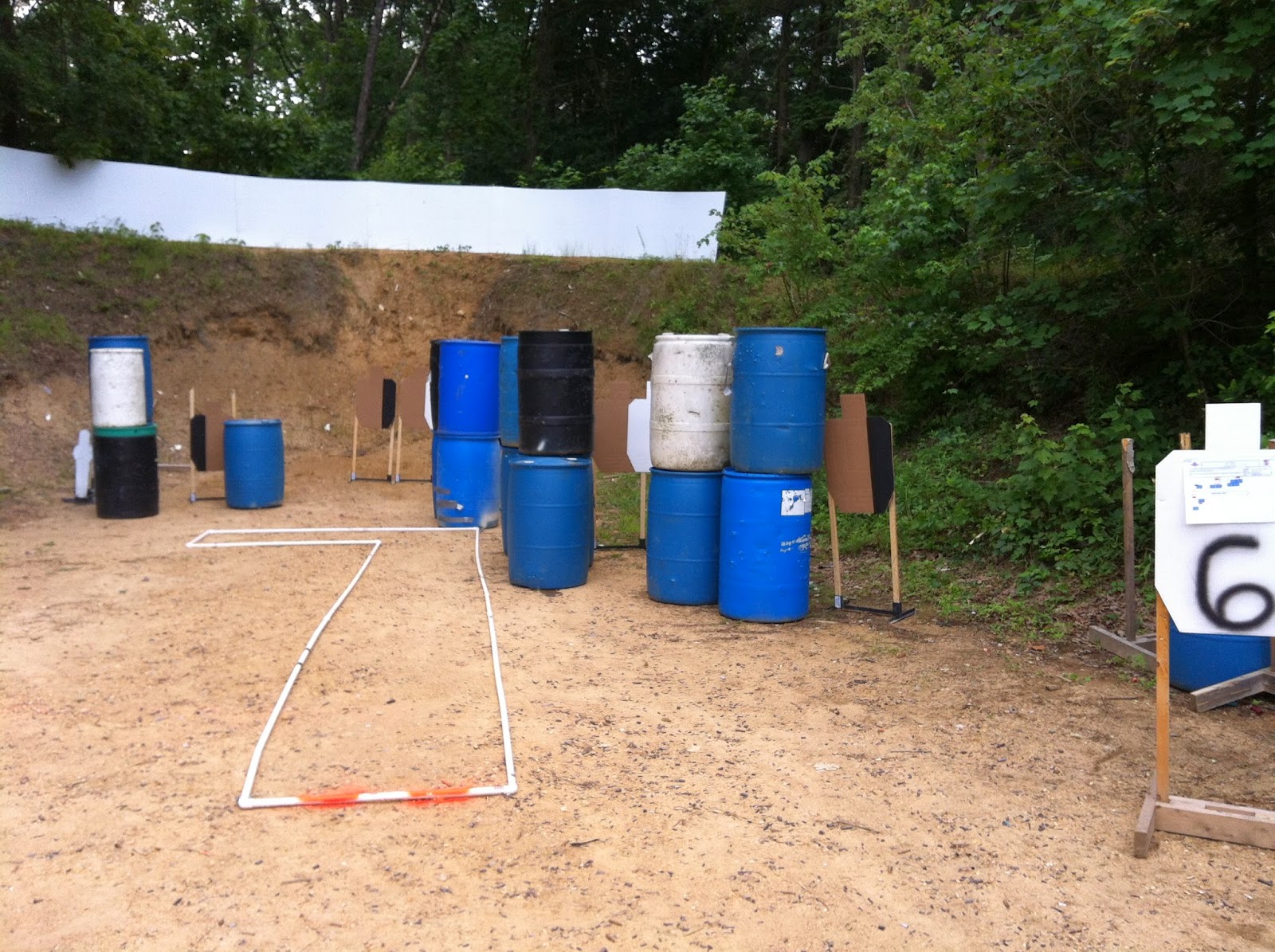 The next two stages were Classifiers. CM 13-08, "More Disaster Factor" and CM 99-12, "Take Your Choice" where set up back-to-back on the pistol range. Interestingly, I had my best stage finish on "More Disaster Factor," finishing 4th out of 26. Also interesting, my hit factor was still below my current average. A single, inexplicable miss on "Take Your Choice" killed that one for me.

Next up was a field course called "Yard Dog." Most of the targets were set up on one side of the shooting lane, separated by walls, with two targets obscured behind barrels at the end. A tight squeeze  between those barrels and a wall gave access to the final to targets. It was a fun course, and again I was very pleased with my hits, though many folks shot it faster. The club has a shoot house set up in this bay as well, but it was not in use for this match.

The final stage was the popular Classifier CM 99-24 "Front Sight 2." A light strike on the first shot of my second string interrupted me and I came back too fast and pulled a miss. There would be no classification bump from this one either.

Other than the one Classifier stage, all my other stage finishes were in the teens and even 20's, with an overall finish of 13th. My classification average will definitely move a few percentage points backwards, making it harder to finally break into B. But, once I shook off the disappointment, I realized I did have fun shooting the match. And that's what it's really all about. I was also thankful for the foresight of a short match. It was indeed HOT and HUMID! I was packed up and in the car for the drive back to Virginia by 12:30. And boy did that air conditioning feel good.

I did have some unsettled feelings about going into Maryland, where the political leaders do not recognize the 2nd Amendment of the Constitution. However, it occurred to me that our Nation is currently led by a man who sees the entire U.S. Constitution as an obstacle to his own ambitions, so to cross the border into Maryland seemed a minor concession.

If my schedule allows it, I expect I'll go back for some other matches in Southern Maryland. It's an easy drive through the countryside from Fredericksburg, as long as there are no issues on the Nice Bridge. I laughed that the toll on the bridge is paid only when traveling southbound. To my mind it does hurt less to pay to return to Virginia, rather than to pay to enter Maryland.