Up until Tuesday evening, I'd never had the opportunity to try the beers from this Richmond, VA brewery. I had been looking forward to the Strangeways Brewing Tap Takeover and Steal the Glass event at Capital Ale House for some time. The anticipation made even greater since the event had already been postponed once.

During the drive downtown Colleen and I wondered, how crowded would it be? Would we be able to get a seat at the bar? Walking in, I was shocked to see a large, and noisy crowd. And then I saw that Brazil and Germany were engaged in some sort of kickball tournament, and folks were watching the action on the TVs behind the bar. We found what may have been the last two seats at the bar and ordered our flights of six Strangeways beers. 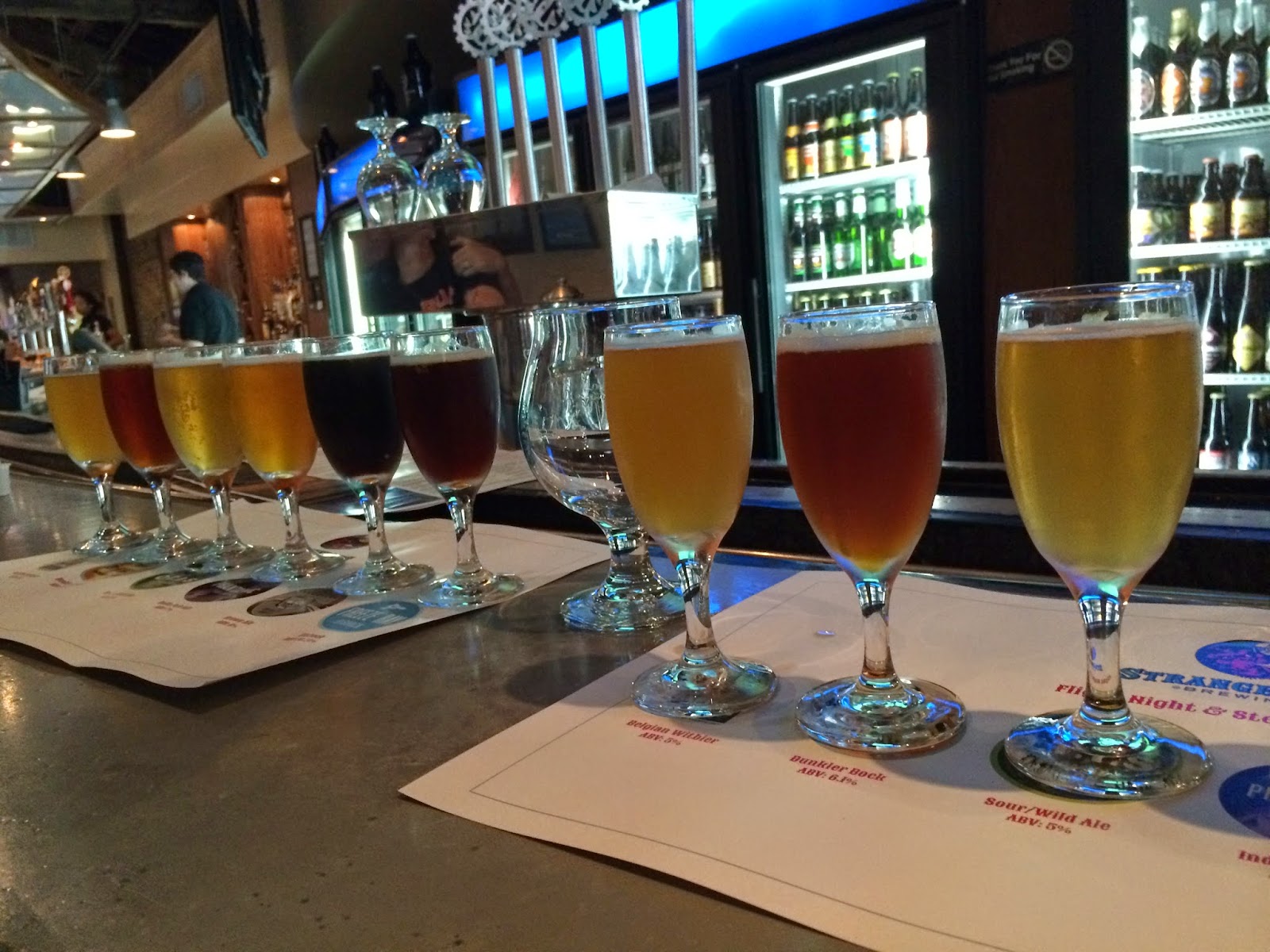 First up was Strangeways Albino Monkey, a Belgian-style Witbier. Slightly cloudy, the flavor was mild and wheat-rich. The second beer in the the flight was B-Sides Honey Bock. The sweetness of honey was noted in both the aroma and the taste. The honey flavor gave way to sweet malt and hint of bitter hops. This was probably my favorite of the group. Soon the small glass was empty and we moved on to the next, interesting beer.

Strangeways O.T.I.S. is described as a Cucumber Melon Sour. I was very intrigued to try this, but didn't know what to expect. The American Wild Ale is brewed with cucumbers, honeydew, juniper berries, and tangerines. I got a hint of the cucumber and melon only briefly, and the tartness took over. Wow, that was good. Another sip... A refreshing and palate cleansing drink. I'd have it again, but I think one glass would suffice in a sitting.

Phantasmic East Coast IPA was next in line. The malt-heavy IPA had fruit notes mixed in with the piney hops. Clean finishing, it left little bitterness behind. Strangeways Woodbooger is described as a Belgian-style Brown Ale. The aroma was caramel, chocolate, brown sugar and roasted malt. The dark roasted malt flavors were offest by a rich mocha sweetness, the sweet and bitter aspects of the beer taking turns at dominance.

Finally, we arrived at Strangeways Freeze Ray, a 10.24% ABV Eisbock. I was looking forward to this one as Eisbocks are uncommon, especially among the US craft breweries. Freeze Ray is a rich, dark dobblebock with a creamy mouthfeel and a smooth chocolate and malt flavor profile. The high alcohol level is completely masked, with no alcohol burn. This one could be dangerous!

Neil Burton, the owner of Strangeways, and Chris Holder, one of the owners of Capital Ale House travelled up from Richmond to attend the event. Neil is a native of Fredericksburg, so this was a homecoming of sorts for him. It was great to meet him and hear his story on how he came to own a brewery. I hadn't seen Chris since before the Fredericksburg CAH location opened, though we've emailed back and forth often. I was good to catch up and talk beer for a bit.

The drama on the TV ended not too long after our arrival. The bar emptied for a short time before more folks started arriving for the Strangeways event. Colleen and I enjoyed our dinner while discussing the beers and current life events. We enjoyed all of the beers and I look forward to trying more from this brewery. Perhaps an extended visit to the brewery is in order. They keep 25 house beers on tap! After a couple hours, we noted that severe weather was building in the area, so I opted to not order a full pint of one of the Strangeways beers, and we headed home. Of course, that did relieve me of having to make a tough choice; B-Sides Honey Bock, or O.T.I.S. Sour, or ...