Fifty-five degrees. That's what the dashboard thermometer read as I started my drive down towards Montpelier, VA for the Greater Richmond Blasters USPSA match at the Cavalier Rifle and Pistol Club. Hmm, better check the calendar, it is August, correct? The temps did eventually get into the 80's but still, there were no complaints about the weather. I took an even more rural route to the range than I did last month, but got there in about the same time, and avoided any roadway that was wider than two lanes. (And I probably couldn't tell you how I got there.) Some of my squad mates arrived late due to traffic on the abomination that is I-95.

The first stage our squad shot, Stage 5, started with the shooter's hands on the edge of a wall that divided the stage. After engaging some paper targets and steel poppers that were strategically placed behind barrels, you had to retreat back up range, around the wall and engage similar targets from the other side. New shooters were cautioned about muzzle awareness while retreating up range. 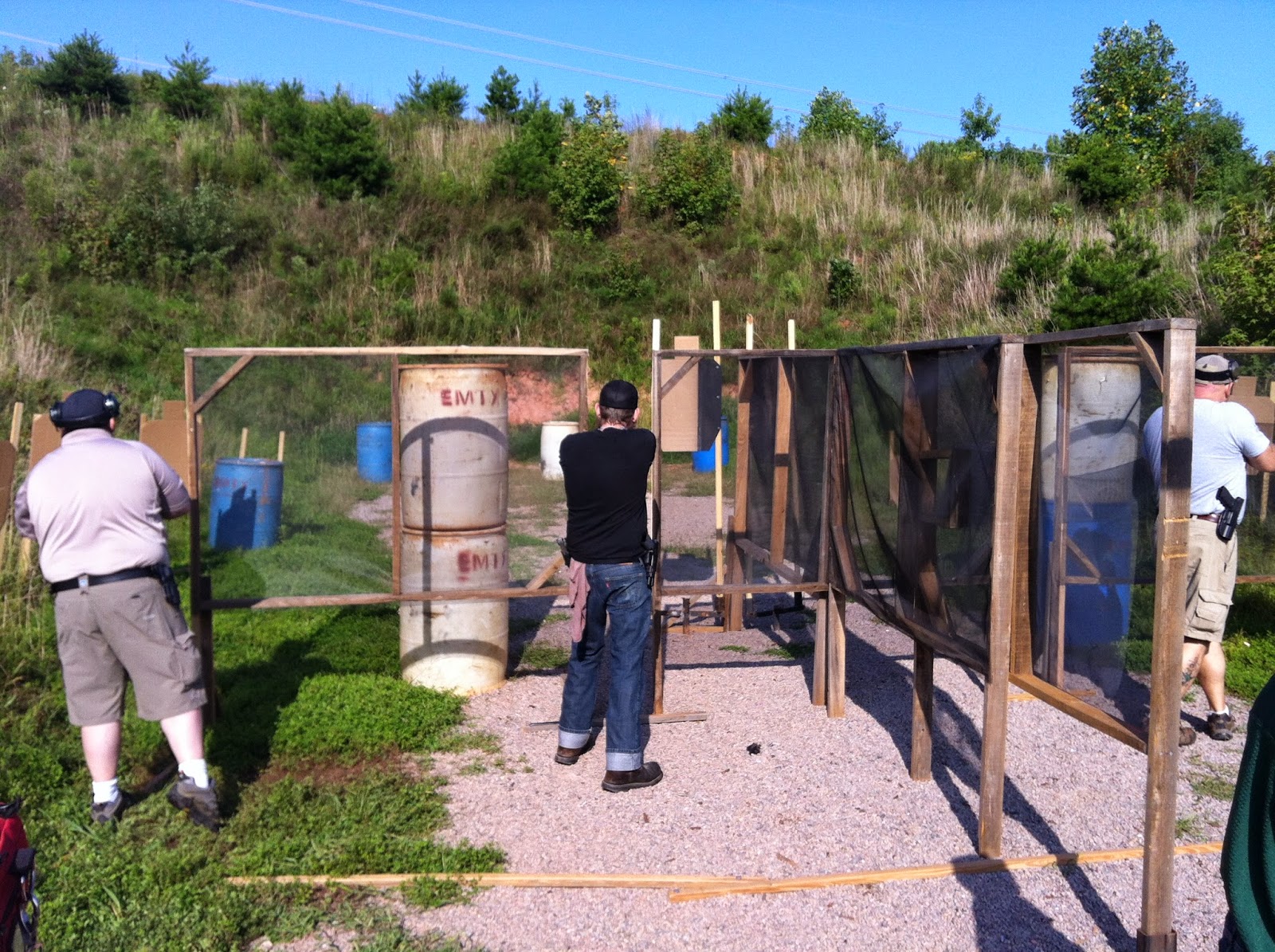 Stage 6 had the shooter starting on the left side in mid-bay, and engaging four paper targets while backing up range. The right side of the course consisted of a zig-zagging path downrange, stopping mid-course to push open a door, through which more targets were engaged. A quick squeeze around another wall and the course ended with a quick finish engaging four close range targets.

Stages 1 and 2 shared the end of the club's rifle range. Stage 1 was a quick stage with 4 paper targets engaged from one side of a barricade, then from the opposite side, two forward falling steel poppers and 2 more paper targets. Stage 2 was the classifier, CM-03-11 "El Strong & Weak Pres."

Stage 3 was a simple stage, offering many options of engagement. A barrel stack was positioned at the center of two walls in a wide "V". The barrels partially obscured 5 pepper poppers, along with 6 paper targets with varying amounts of hard and no-shoot covering. A couple of outlying targets on either side were engaged from the start position up range. Most shooters were assured of a standing reload at the barrels — the decisions came mostly with the steel targets — engage some of the steel from near the start position, or from near the barrel, and from what side? For a seemingly simple stage, the options were many. 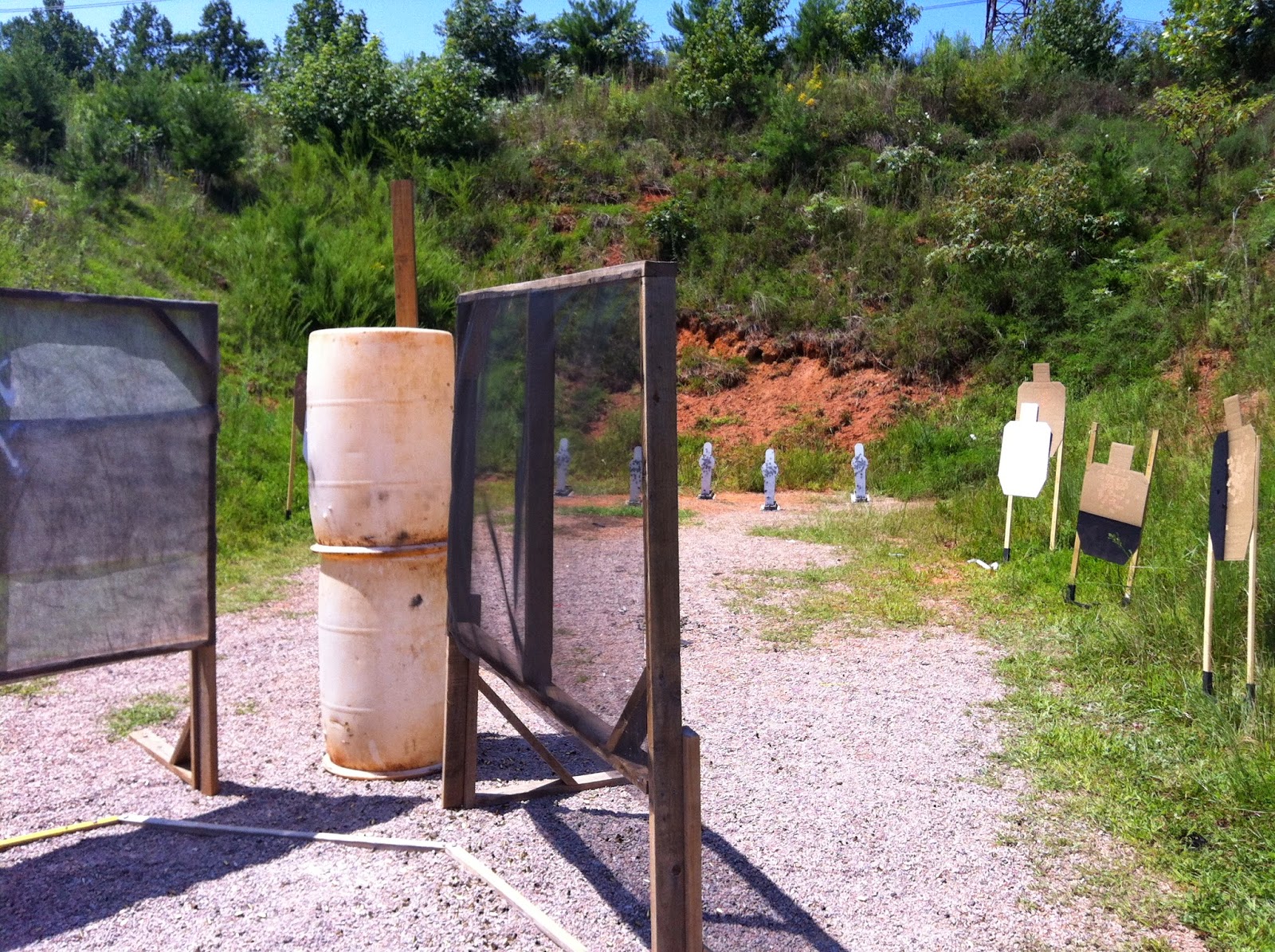 The final stage we shot was probably the most fun, and quite unusual. The shooter started seated in a chair, facing up range. The unloaded gun, along with all ammunition to be used, was placed on a table behind the shooter. At the start, the shooter rounded the barrels behind him, loaded whatever magazines he needed onto his belt, loaded the gun, and ran the course. My plan had me shooting ten rounds between reloads, which meant shooting to slide lock. All reloads were planned on the move, so that wasn't a time loss issue. My problem came after my first reload, when I had a feed issue and had to run the slide to get the gun back in battery. Fortuitously, I had decided at the last moment to take the time to pick up an extra mag off the table, which I now needed due to losing a round here. The stage finished with five close and fast targets, four of which were mostly obscured behind a barrier, forcing shots over the wall for two and then a drop to the knees to shoot under for the last two. 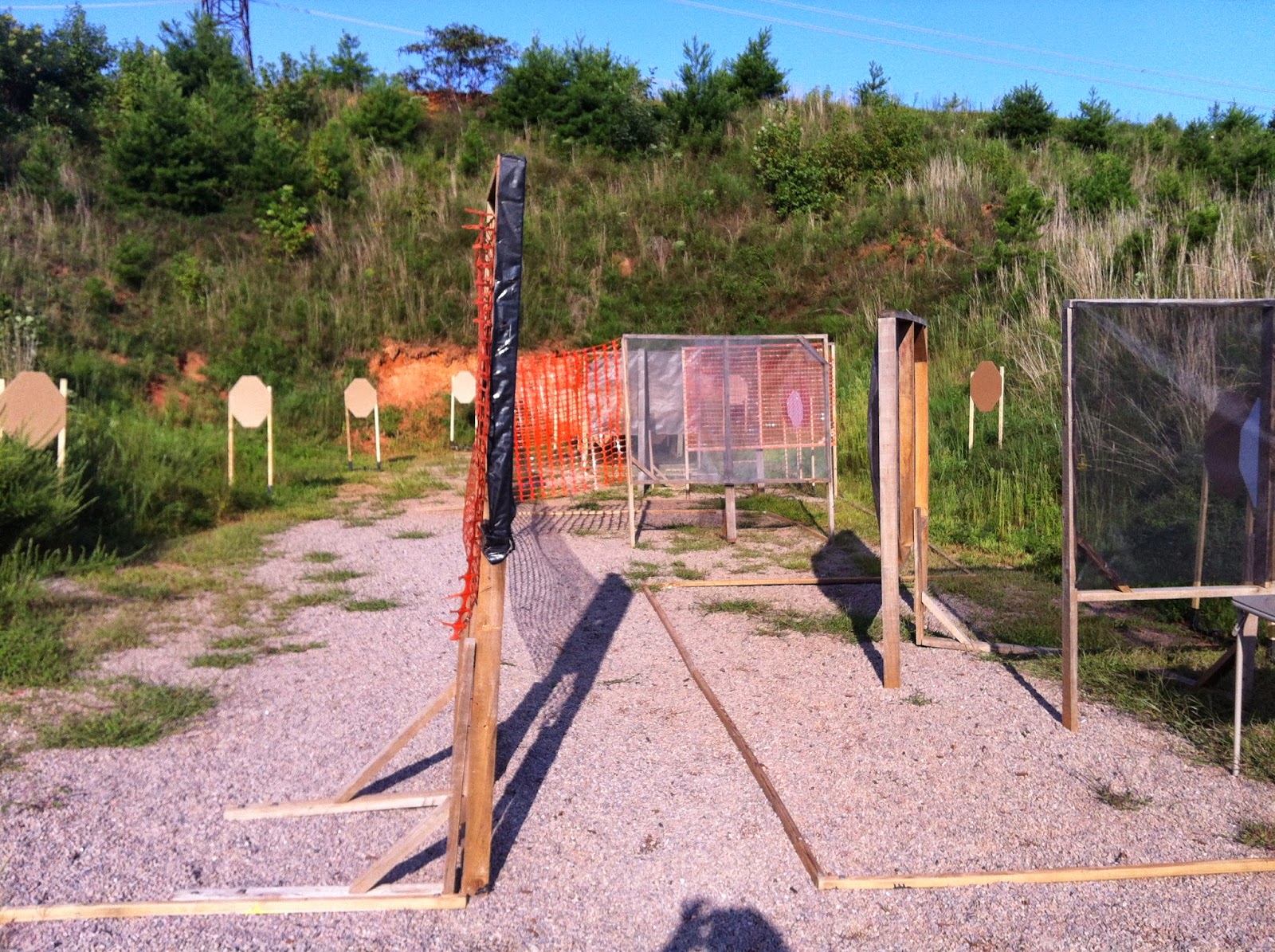 It was a fun match with some interesting challenges. I didn't shoot as well as I would have liked, finishing 14th out of 28 Production shooters. Still, it was a great time shooting with some old friends, and meeting a few new ones as well. I'm looking forward to next month already. Perhaps I'll even settle on the right country roads for the best route. I've now gone to the Cavalier USPSA match twice, and have not managed to take the same route in either the drive to or from the range. I think I've now found my preferred route to take, so perhaps next month there will be no stress, at least for the drive.