I've been having a craving for mussels recently, and for several weeks have been teased by the Capital Ale House Facebook postings about "all you can eat" mussels on Thursdays. Alas, my schedule didn't allow me to take advantage of that special, until this week. When "Checkered Flag" and I hit Capital Ale House for dinner this week, my menu selection was predetermined.

In addition to the two regular mussel selections, Garlic and Herb, and Smoked Gouda and Bacon, the chef had created a spicy version, with a sauce prepared with Orkney Skull Splitter Scotch Ale, Duck Rabbit Stout, and copious red pepper flakes. I started out with a large bowl of these spicy mussels and enjoyed them immensely. The dark sauce was smoky and sweet at the same time. (And I brought home plenty of it down the front of my shirt too.) Despite the robust sauce, the flavor of the mussels still came through. It wasn't long before had good burn going in my mouth from the red pepper. 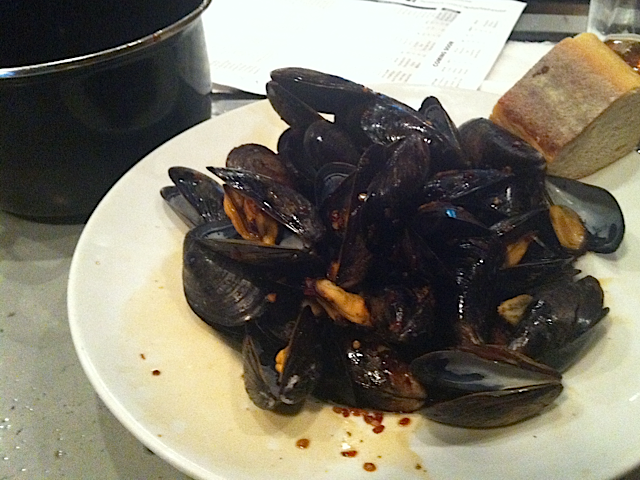 Fortunately I had a good beer to cool my palate. Not only is August Virginia Craft Beer Month, Thursday was also being promoted as National IPA Day. (What's next, craft beer Hallmark cards?) Keeping with the theme, I ordered a Missile IPA from Champion Brewing in Charlottesville, VA.

I don't recall having tried any Champion Brewing beers, so it was also good to try out another Virginia brewery. Missile IPA is a bright orange color with a thin white head. The aroma is full of citrus goodness. The flavorful hops leaned towards the bitter, with grapefruit rind and pine leading the way. The bitterness was balance by a sweet caramel malt. I rather enjoyed this one.

In keeping with the Virginia beer theme, "Checkered Flag" stuck with his favorite style and ordered a Starr Hill The Love Hefeweizen. 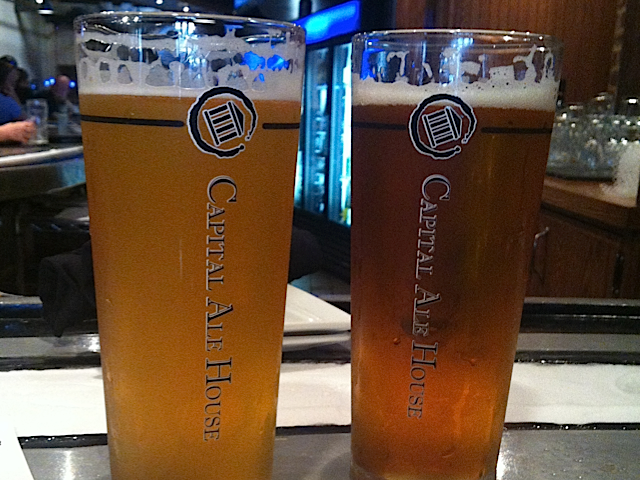 Eventually, both my bowl of mussels and my glass of beer were empty. But, it's "all you can eat" so I opted this time for the Smoked Gouda and Bacon Mussels. These were covered in a thick, smoky cheese sauce with lots of bacon thrown in. I enjoyed this version too, but the heavy cheese sauce did mask the mussel flavor a bit too much for my tastes. I ordered another Virginia beer, Starr Hill Grateful Pale Ale to accompany this batch of mussels. I was sorely tempted to call for a bowl of the Garlic and Herb version as well, but decided to save that for another day

Yea, it was a fun evening.