I was first introduced to Black Bear Bistro when Chef Todd offered me an Oyster and Beer Shooter during a visit to Old Bust Head Brewing. The Warrenton, VA eatery was serving food at the brewery the day I visited and I promised myself that Colleen and I would visit the restaurant soon. I followed through on that promise with an early dinner after the Old Bust Head tap room grand opening this past weekend. Interestingly, we saw several people in the restaurant who we had also seen earlier at the brewery.

Naturally, the restaurant's beer selection was my first order of business. In an admirable showing of support, Black Bear Bistro has only Virginia beers, plus one Virginia cider on draft. That's right, all eight tap handles are "native"; Starr Hill, Old Bust Head, Lost Rhino, Legend and Bold Rock Cidery were offered. There are also bottled selections listed on the menu, though I frankly paid that list no mind. Since I had just come from Old Bust Head, and had been enjoying their beer two weekends in a row, I opted to drink another Virginia beer, Lost Rhino New River Pale Ale. That particular beer also has a special place in our hearts, and I raised a silent toast to an old friend. 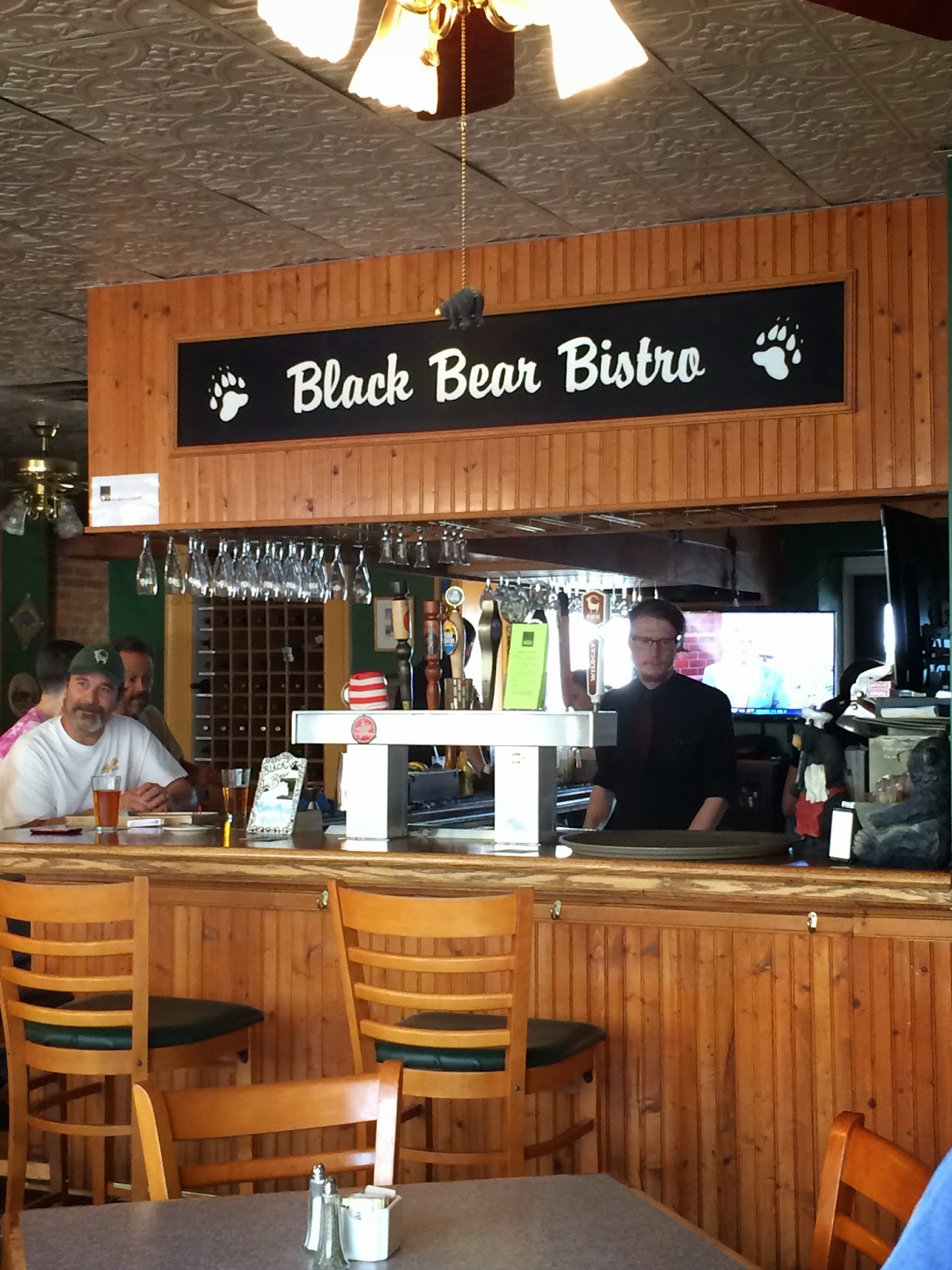 We perused the dinner menu for a while, and decided to start with an appetizer plate of Fried Oysters. The breaded oysters were browned on the outside and just cooked enough to not be considered raw. The meat was juicy and tender. Three dipping sauce options were offered; Regular, Habanero Bacon, and Sweet Thai. Our server used the adjectives "spicy" and "hot" for both of the first two. Undecided, we asked for both the Regular and Habanero Bacon, for research purposes. I first tasted the "regular" sauce and found it to be deliciously "warm." Next I popped an oyster dipped in the Habanero version into my mouth, and for a moment didn't notice anything. And, then. Bam! There it is. Habanero heat, and a bit of smokiness. There's some serious heat going on there, all the while still quite flavorful. After the oysters were gone, I continued dipping my bread into both sauces.

Yea, that was a whole paragraph on the Fried Oysters. They were that good. Frankly, I might just make a meal out of them someday. But not this time. For my main course I selected the Bistro Crab Cake entrée. This was a fried "pancake" of crab meat set on a serving of Wild Rice, with Broccoli Rabe on the side. The crab cake was meaty and very tasty. I had no problem cleaning my plate thoroughly. Colleen opted for a Grilled Pork Flat Iron Steak set on Mashed Cauliflower and topped with Sautéed Spinach and Mushrooms. The thick pork steak was moist and set on a heaping serving of mashed cauliflower. Colleen must have enjoyed it very much, as there was no offer to share. ;-)

We lingered over our meal for a while, enjoying time together and the delicious food. There doesn't appear to be much happening on a Sunday afternoon in Warrenton, but as it got closer to the dinner hour, the curbside parking started to fill, and folks began coming in for dinner. As we headed out for our drive back to Fredericksburg, it was clear that Black Bear Bistro was a popular place with the locals. I know for sure that we'll be back.