On Saturday I headed into Faquier County to visit Old Bust Head Brewing. The brewery is an easy drive from here, and I can totally avoid the I-95 mess. Construction and summer traffic on that feat of urban non-planning has kept me from making visits to other breweries, but this drive was actually pleasurable. When I arrived at the brewery, just a little after opening time, there was already a small crowd inside, and I saw a stream of people arriving and leaving with growlers. I got a brief intro from one of the friendly employees and opted for a flight of all six beers being served.

Old Bust Head opened earlier this year, holding their first public event in February. They have been distributing in bottles and kegs in the local area since around March. In fact, Old Bust Head beers are quite well-distributed, especially for such a new brewery. I was very surprised when I walked into the building and saw the size of the operation. The owners did not take the "start small and grow" approach, something that seems to have worked out well. 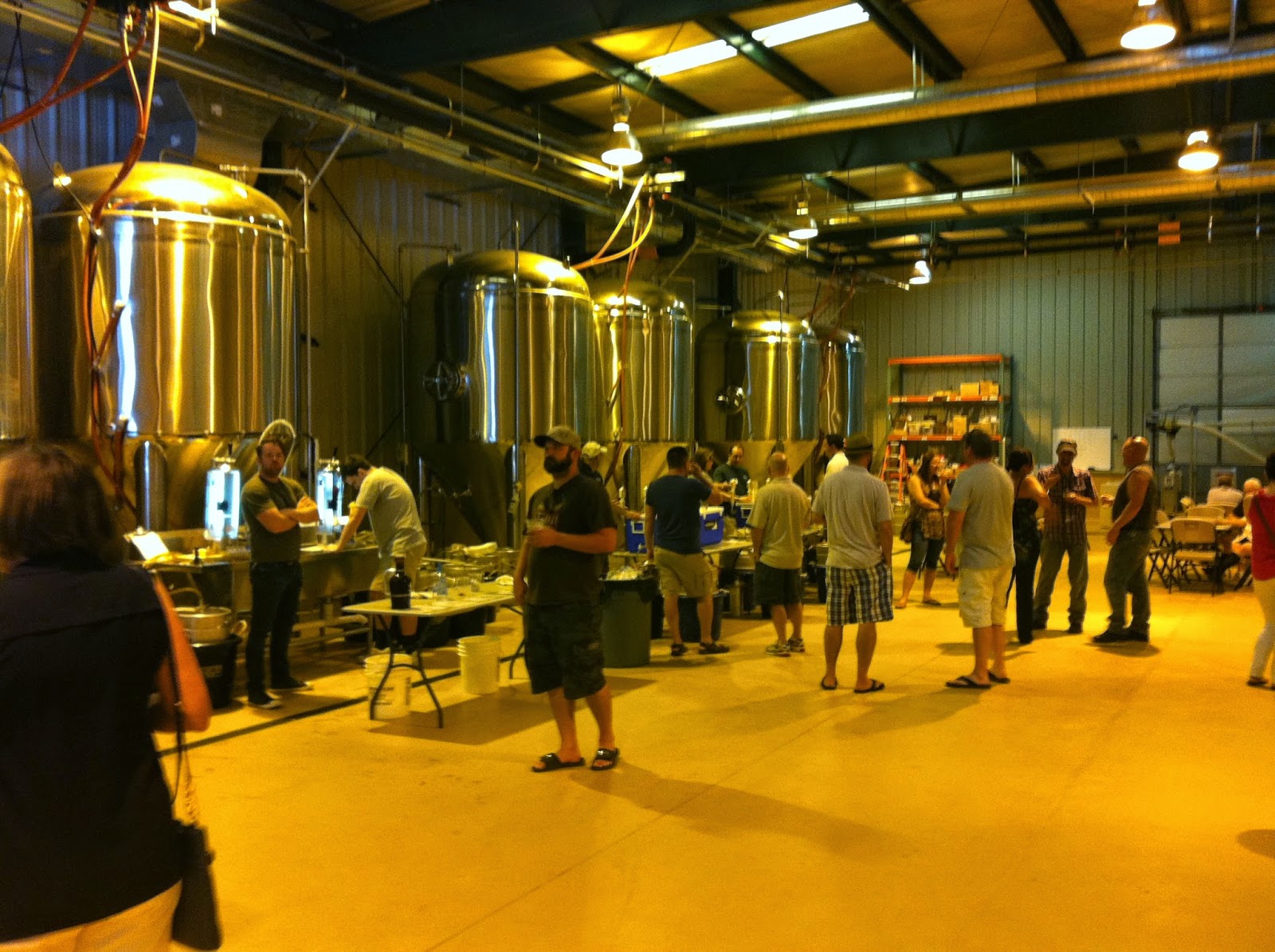 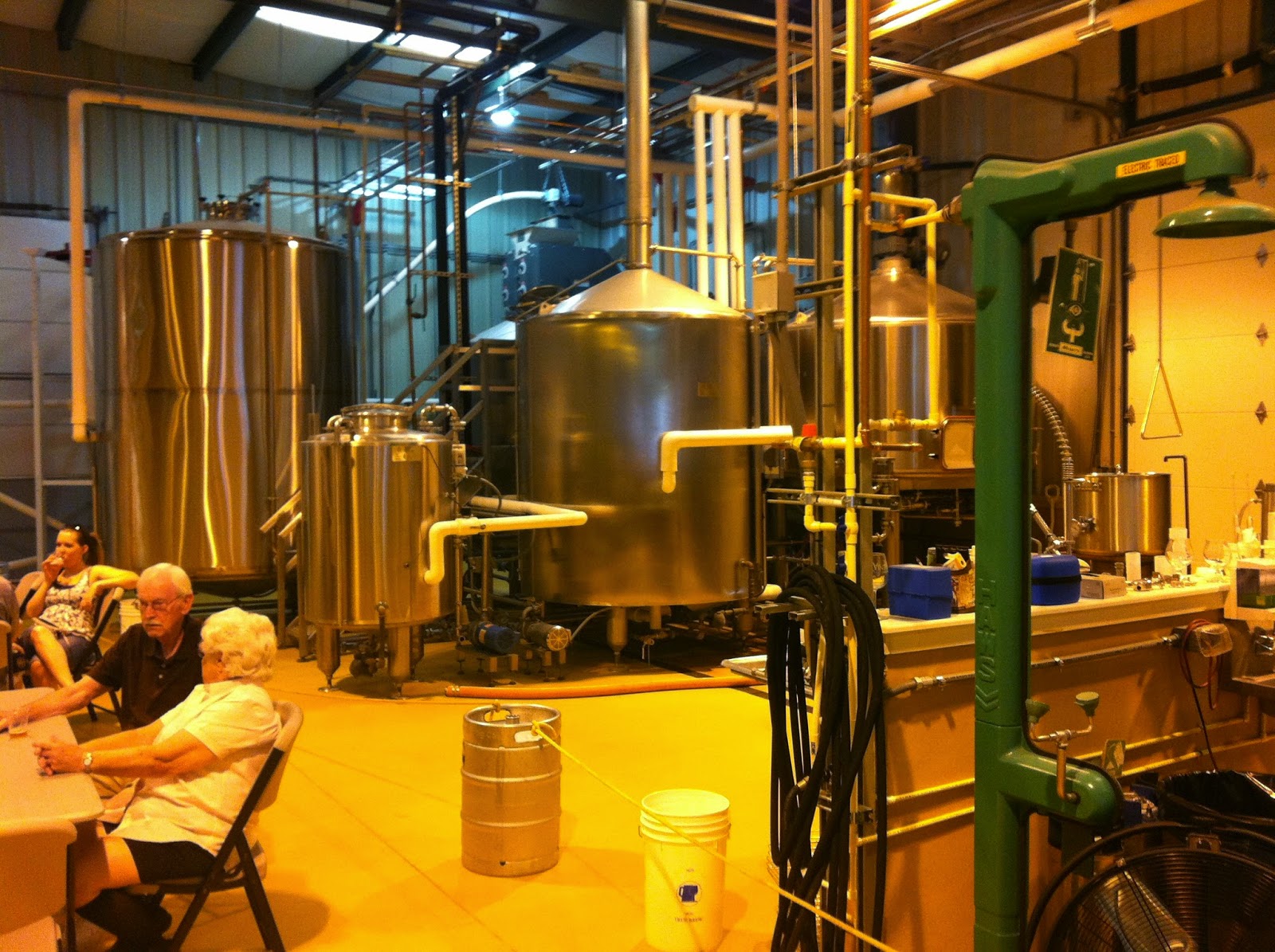 But it takes more than shiny equipment to be successful, good beer is the primary requirement, so let's get to those beers.

First up in the flight was Bust Head Old English Pale Ale. This is a classic English Pale Ale, and the only one of the beers I've had previously. Deep reddish-brown in color with a toffee and caramel malt and lingering hop bitterness make this the brewery's most popular beer. Chukker Pilsner was next up. The toasted bread and noble hop crispness made for a refreshing beer.

As I worked my way down the jockey box line, the European influence continued with Wildcat IPA. This English-syle IPA was rich in sweet malt with a hint of fruitiness. A subtle hop bitterness kept the sweetness in check and provided a pleasing bitter finish to the flavor. I heard many folks commenting that they enjoyed the balanced nature of this IPA.

The newest Bust Head beer, Shorthorn American Pale Ale was making it's debut this weekend. This APA was the most hop-forward beer being offered, breaking away from the English styles and bringing on the citrus hops favored in West Coast style Pale Ales. Shorthorn has a crisp citrus rind bite along with a piney bitterness. I suspect this one might just compete with the English Pale Ale in popularity.

Next on the list was Vixen Irish Red. I was looking forward to trying this, as I enjoy a good Red Ale, but frequently find them lacking. I was not to be disappointed. Roasted malt and sweet caramel combine to make a full-flavored ale. The lingering bitterness remained on the palate, enticing you to yet another sip. I was seriously considering getting a pint of this Red Ale, even before I finished my flight.

Chinquapin Chestnut Porter was the last beer in my tasting exploration. This robust porter was a change from the medium to light bodied beers to this point. This one had flavors of dark coffee, bitter cocoa, roasted malt, along with the roasted and mildly sweet nuttiness from the chestnuts. I found it richer than the average porter, and worthy of further consideration.

All six beers I tried were very good. In fact, when I finished the flight, I had a long period of indecision trying to decide what to order to accompany my much needed lunch. I was tempted by beers outside my usual style preference, especially the Irish Red and Chestnut Porter. I wandered outside the table where they were selling food, to see if the menu would aid in my decision making.

The afternoon's offerings were from the nearby Black Bear Bistro in Warrenton. I was immediately asked if I liked oysters by the chef. "Of course," I replied. So Chef Todd proceeded to prepare a complimentary "Oyster Shooter" for me to try. A fresh shucked oyster was joined by a bit Chimichurri in a shot of Shorthorn Pale Ale. Despite my lifelong fondness for oysters and love of craft beer, I've never had such a concoction previously. Boy was I missing out! The saltiness of the oyster, the spicy Chimichurri, combined with the citrus of the Pale Ale made for a delightful appetizer. After chatting with the folks from Black Bear, I headed back into the brewery for a pint of Shorthorn Pale Ale, to go along with a Lamb Gyro for lunch. A generous serving of lamb, in a toasted flatbread with local yellow tomato slices proved a filling and hearty lunch. I was told they also keep a selection of Virginia craft beers, including Old Bust Head, on hand at their restaurant. I've since checked out the online menu, and reviews, of Black Bear Bistro, and am looking forward to a visit there soon. 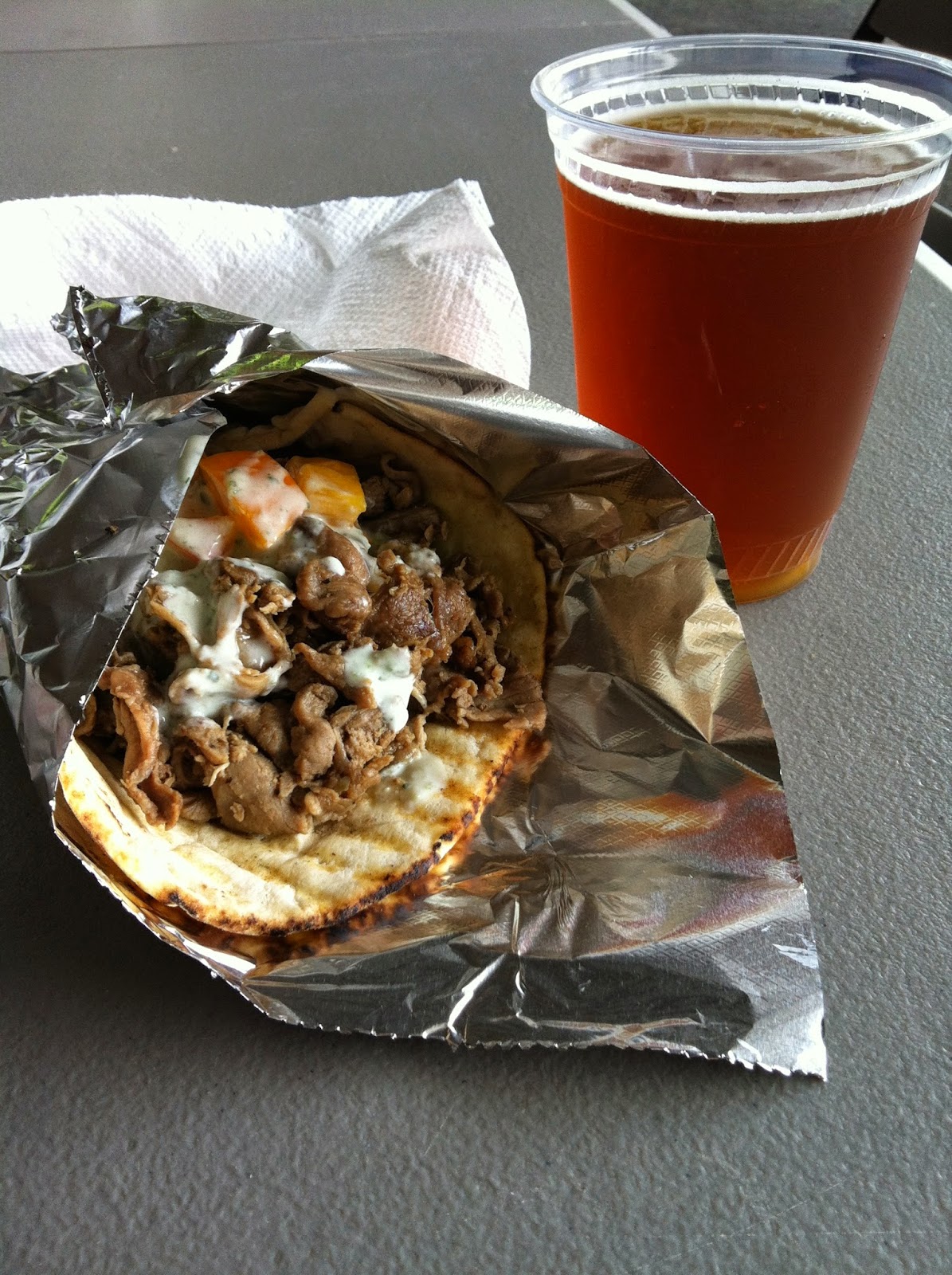 I talked to a number of Old Bust Head employees during the course of the afternoon, and to a person, they were friendly and truly excited to share information about their beer and the brewery. Many were also excited about the grand opening of the taproom next weekend. This weekend was the last chance to stand and drink in the production brewery. "No more setting up in here" one server excitedly told me. Once the 200 seat taproom opens, there are plans to add more fermentation tanks in the brewery space.

The tap room opening this coming weekend will also feature the debut of Old Bust Head Gold Cup, a Russian Imperial Stout joining the lineup. I sure would like to make that event. Even if I don't, I plan to visit Old Bust Head again, very soon. I was tremendously impressed with the beers and the friendly folks. It's a sure bet too, that we'll follow up the tap room visit with a meal at Black Bear Bistro.