A Challenging IDPA Match at Rivanna

On Saturday it was time once again to head over to Charlottesville for the monthly IDPA match held by the Rivanna Action Pistol club. Checking the weather the evening before, I saw there was a predicted 35° temperature swing during the time of the match. The morning started at 34° and the car thermometer read 72° at the end of the match — in February!

The Match Director set up four extremely challenging stages. The first stage had us seated at a table, with the loaded gun in a box, and spare magazines on the table. There were two rows of targets placed behind a row of non-threats. Copious leaning in the chair was required to see all targets. Head shots were not required, but for all intents and purposes, heads shots were the safest option to avoid the non-threat targets. 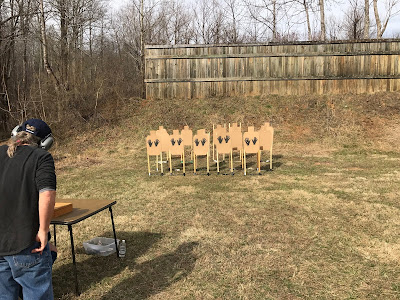 Stage 2 was an interesting stage with two moving targets. From the start position we faced three targets; an open target on the left, in the center an up-down target that popped up from behind a barrel and activated by a stomp plate, and on the left a paper target with a falling popper behind it. The popper activated a double swinger with a non-threat that we would shoot from the next position.

The up-down target come up and dropped back down very quickly, so you had to be ready to shoot it when you stepped on the activator. There were differing opinions on when to activate the double swinger. The targets were slow to separate, but as they slowed the targets would get back in sync. Continuing through the course we faced a target between two non-threats. At the final position, three more targets, two of which were also partially obscured by non-threats. Though not required, shooting head shots seemed the safest course of action. 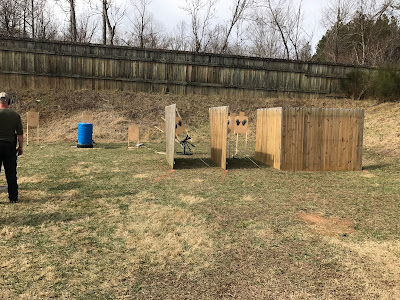 Stage 3 started us facing up range, standing in front of a target stand, which we knocked over at the start before turning to engage three targets while on the move. Moving to cover, we found two more targets, with a non-threat placed to make head shots the way to go yet again. All the targets on this course of fire required a minimum of three hits each.

The fourth match stage, which was the first one our squad shot, consisted of just three, open targets. Magazines were downloaded to 6 rounds. We put two hits on each target, did a slide lock reload, then put two more hits on each. Simple? Not quite, the targets were set at 35 yards! It was quite the stage on which to warm up. We were warned that future matches would feature even longer shots.

The match was a lot of fun, and a bit frustrating at the same time. I hit three non-threats and dropped several head shots. Accuracy was extra important at this month's match. Between long distance shots, fast movers, head shots, and lots of non-threats, it was quite the challenge. In total, the 68 shooters racked up 3,786 points down, 136 hits on non threats and 40 procedurals — in just four stages requiring about only 60 shots!

The Rivanna club is hosting the Commonwealth Cup in September, so I expect the monthly matches leading up to the sanctioned match this fall to be more demanding than usual. It'll be good preparation, as well as a fun way to, hopefully, get better!

Now, back to the practice range, and more dry fire...