The “No More Black Targets” Campaign is, apparently, a movement to eliminate the use of black targets at gun ranges. Or, I think it is. Honestly, I am not sure if this is a serious movement or an exceptionally well-played internet troll. From the website...


An academic study published by University of Illinois researchers drew together findings from 42 different studies on trigger bias to examine whether race affects how likely a target is to be shot.

"What we found is that it does," Mekawi told NPR's Arun Rath, who covered the story.


The claims of liberal snowflakes often border on the absurd, but this is the first time I've ever heard of race being applied to cardboard. If race is applicable to non-living objects, then we must take into account that most guns are black as well. It then follows that what we actually have is a black-on-black crime issue, rather than an issue of racism.

On the other hand... 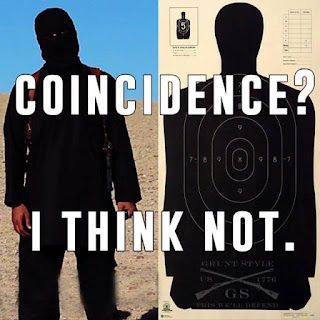 I looked through the alternative target gallery on the site. If #NoMoreBlackTargets catches on, the hippie community may soon feel targeted as well.

Email ThisBlogThis!Share to TwitterShare to FacebookShare to Pinterest
Links to Related Musings: Are They Serious?, Liberal Logic, Precious Snowflakes, Targets