I got out for lunch a little later than usual on Friday. As such, the indoor range was quite crowded by the time I arrived. The constant firing was somewhat distracting, especially when you added in the brass coming over the walls and hitting me. Though, given recent events, getting used to shooting amongst gun fire might be a good thing.

My plan today was simply to get out of the office for a bit put some rounds down range with the compact SIG P239. I put the splatter target at at just seven yards. My first few head shots almost made a smiley face on the target; it was purely accidental. 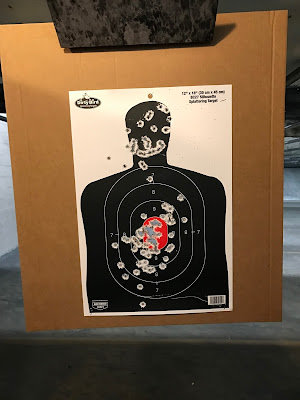 I felt pretty good as I took slow shots at the 4 inch head area, keeping most of the shots on target. The groups opened up a bit as I sped up for the body shots, though most were still in the acceptable range.

As I left to head back to work, I too had a smile on my face.