After we finished up a fun-filled hour at the range, Colleen and I headed over to our next planned stop, Strangeways Brewing. We don't get down to Richmond often, and this place has been on my "need to do" list for sometime. Strangeways has 36 beers on tap, so deciding where to start was an issue. The friendly bartender suggested we start with the "Nucleus Flight" consisting of six of the brewery's core beers.

The beers on the flight are Albino Monkey White Ale, Woodbooger Belgian Style Brown Ale, GWAR Blood Red Ale, Phantasmic Belgian IPA, Hop Howler, and Überlin Berliner Weisse. We enjoyed the entire flight. Interestingly, Colleen and I were in agreement in picking Albino Monkey, Woodbooger, and Phantasmic as our favorites, but it was quite difficult to actually rank the six beers in order of preference. 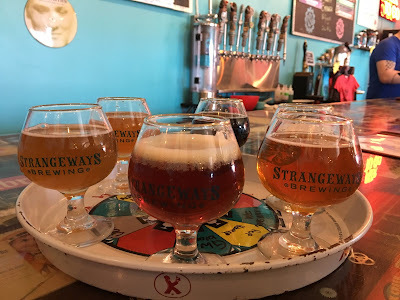 The 3.5 ounce servings were enough for us to share but not so big that we couldn't try out more beers. So after the flight we grabbed a bag of tortilla chips and some salsa from the cooler, and tried a couple more 5.5 ounce tasters.

Colleen selected the Tirami'zu Brew Rum Barrel Aged Porter. This porter is brewed with coffee, cocoa nibs, vanilla beans and aged for 3 months in rum barrels. How could one go wrong with that? The beer did justice to its namesake with flavors of rum, chocolate and coffee. The mouthfeel was thick and creamy. My next selection was Legalize It Come Togther Hoppy Wheat Ale. The juicy citrus hops were joined by a nice wheat flavor that for a unique flavor profile.

The beers at Strangeways are as unique as their names. As we prepared to leave for our next stop, I still was curious about a few other beers on the list. One that had been tempting me the whole time was Virginia Stingo Red Wine Barrel-Aged English Strong Ale. At 10% ABV, I couldn't add it to my tasting list, but the bartender offered me a small taste. The Old Ale was aged for nine months in oak barrels that previously held red wine. And what a fantastic flavor that created! Boozy, with lots of dark fruit with caramel sweetness. In retrospect, I should have brought a bottle home.

After Strangeways, our original plans were to grab a quick bite to eat and head home. However, we decided to get food, and more beer, at another area mainstay, Legend Brewing Company.

We opted for a couple of starter plates for an early dinner; the Munich platter with Bratwurst, Kielbasa or and Andouille, (we upgraded to all three) a soft pretzel, sauerkraut, havarti cheese and spicy mustard, and the Smoked Salmon platter with honey smoked salmon, avocado, roasted red pepper, Fuji apple, dill cream cheese and grilled pita. The two plates contained more than enough tasty food for us to share. 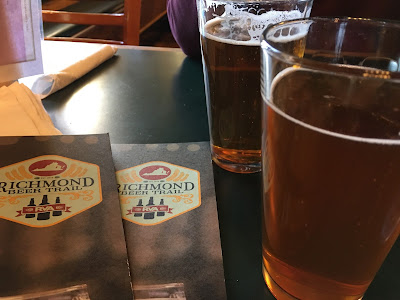 As for the beer, I had a Golden IPA and Colleen enjoyed the seasonal Winter White. Both beers were fine accompaniments to the food, over which we lingered for quite a while. We also enjoyed a sample of the just released Ütebier. This struck me as a cross between an American Pale Ale and a very crisp Pilsener. It was an interesting flavor, and one I might seek out in a bottle locally.

Believe it or not, after all the food and beer enjoyed in the long day, we debated a bit about the next stop in our adventure. We'd already made it a longer day than planned, but as noted, we don't make it down to Richmond all that often and debated extending the road trip. In the end, we opted to start the long drive home, vowing we'd be back soon.