Several years ago I picked up Chrony Alpha Master chronograph. Even though I don’t reload my own ammo, I thought it would be good to get an idea of power factor of the commercial ammo I buy. (Like brewing my own beer, reloading ammo is something I consider another hobby, neither of which I have much interest doing at this time.) Good intentions aside, the chronograph sat in my garage, unused.

Last weekend I went online to find the user manual and took the chronograph to the range to try it out. I set up the unit in front of a target at the berm and sat myself in a chair at about the 10 foot recommended distance. 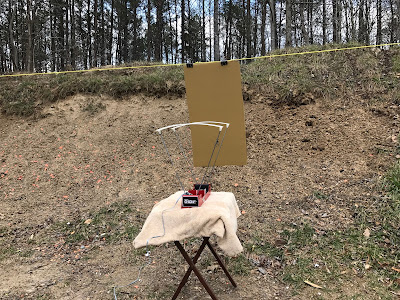 I tested with two different guns, the SIG P239 and P226. Two different commercial ammo brands were put fired through both guns, Federal American Eagle 9mm 124 grain and Freedom Munitions 9mm 135 grain. I have previously recorded data for the American Eagle ammo through the P226 from several USPSA matches to use for comparison.

Starting out with the compact gun I was somewhat shocked by the readings, which were lower than the manufacturers’ claims. The readings were also quite varied, by as much as 50 fps between the high and low readings. Then I switched to the P226. Again, the numbers were inconsistent. But the most surprising finding was that the Chrony was giving readings that were 50 - 80 fps lower for the American Eagle ammo than the previous results from the match chronographs.

It could be that I am not conducting the testing correctly, or perhaps the equipment is not working as expected. I do have another sanctioned match coming up where I can get some more comparison data. I’ll try again with the Chrony unit in the future as well.

Despite not getting what I can consider reliable data, the testing did give an opportunity to get out to the range, even if for a short while. And that’s always a good thing.