I took on Monday off so Colleen and I could have "date day" doing fun stuff. We started our date by enjoying some shooting at Blue Ridge Arsenal - Winding Brook. Blue Ridge Arsenal is a new range in Ashland. It's less than an hour from our home and an easy drive down I-95. We'd never been and were looking forward to checking it out.

Upon arrival it took just a few minutes to do the one-time review of the range rules at an electronic kiosk. After that we paid our fee at the counter and got to our lanes with no delay. The Range Officer gave us a quick tutorial on operating the target carriers and a few other directions. He watched us for a few minutes and then left us alone to shoot. The Range Officers we saw were attentive but not hovering. 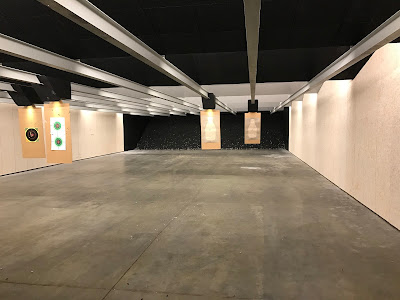 Shooting out to 25 yards is available at Blue Ridge. I started out shooting at 7 yards, then moved the target out to 10 yards. I also made use of the turning target feature to add some challenge. Shooting from low ready, I set the target to be exposed for 2.5 seconds and varied the shots from 1 - 3 each cycle. At first I was slow acquiring the sights when bringing the gun up. Eventually I was getting the third shot in consistently — and getting accurate hits. In the future, I'll vary the distance and timing to see what I can do. Drawing from the holster is permitted at Blue Ridge Arsenal after approval by one of the Chief Range Officers. There was no one on duty to do that while we were there but I'll definitely seek that approval on a future visit.

For my last few mags I set the target at 15 yards. Even though I can't see the target clearly at the distance, I was happy with the results. I jerked a couple shots, as often happens when I try to slow down too much and let my finger "think." 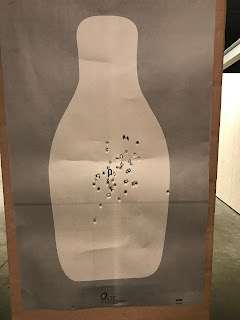 It was fun shooting with Colleen. We each had our own lane, but the glass dividers allowed us to see each other. We frequently stopped to compare targets and share what we had been doing. It's always a thrill for me to see how well she shoots too.

I recently learned that Blue Ridge Arsenal holds a monthly weeknight IDPA match. Now that I've visited the range, I'll try to fit that into my schedule on occasion too. And I'm pretty sure Colleen and I will be back again for more range time soon. Our local indoor range is much more conveniently located, but shooting at the turning targets in a climate controlled range was much more enjoyable than shooting static targets in the cold.

After shooting, we continued our date by visiting a couple local breweries. That will be a subject of another post.