On Saturday, my friend Stuart and I ventured across the Potomac River into the People's Republic of Maryland to shoot the Chesapeake Cup Tier 2 IDPA match at Sanner's Lake Sportsman's Club. The match was a BUG and CCP specialty match, so I shot my SIG P239 in the CCP (Compact Carry Pistol) division. The match was a lot of fun, with interesting and challenging stages.

As I went through my photos from the match, thinking about which stages to highlight, I realized that each of the stages had some unique or interesting element about it. I'll mention those points briefly, and hopefully not make this post overly long. Photos of all the stages from the match are posted on Flickr.

All the original squads were divided up even further the morning of the match, so we shot with just six folks in a squad and the match moved quickly. Thank you to all the volunteers who showed up to run us through the stages efficiently.

Our squad started on Stage 4, which saw us "handcuffed" to a table. Two target groups were placed on either side. The rope cuffs restricted our movement such that most folks had to shoot the targets one handed. I had my one and only hit an non-threat of the match on this stage.

The scenario for the next stage started us holding a couple of water bottles before engaging some distant targets in a "car." Next we moved to a window where more targets were found. The final target on this stage required a significant lean out from the fault line to hit, and the hard cover at the edge of the port took quite a beating. 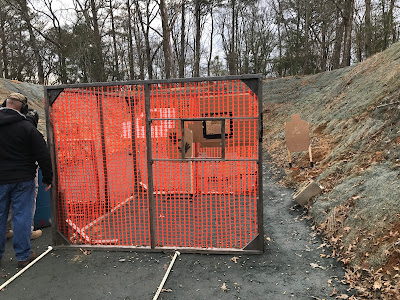 Stage 6 started with the loaded gun in a box. There were three targets to be engaged while seated. After leaving our seat there where three more targets to be shot from two other positions.

The next stage had a moving target of a sort I had not seen previously. At the start, the shooter flipped a light switch which activated a pneumatically operated up and down non-threat blocking the shot on a scoring target. The non-threat popped up immediately at the start, too fast for most folks to draw and shoot. So we first moved left to engage three paper targets and a steel popper on the left, then hit then center target as we moved right for the final targets. The challenge was that the moving non-threat dropped slowly down, then after a few seconds, popped up FAST. You had to be prepared to shoot as soon as it dropped, else you risked having it jump up as you shot. Time it wrong and you waited for the delay before it dropped to expose the target again. This was a very fun stage to shoot. 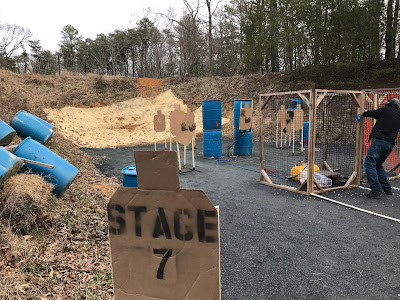 Stage 8 consisted of nine targets all requiring one shot each. The first six targets were to be shot on the move as we advanced down a row of barrels. There were some non-threats interspersed so timing of the movement was important; too slow and you wasted time, too fast and you passed a target's visible range. For the CCP division, shooting well and not taking any makeup shots meant you saved time by not needing to reload. 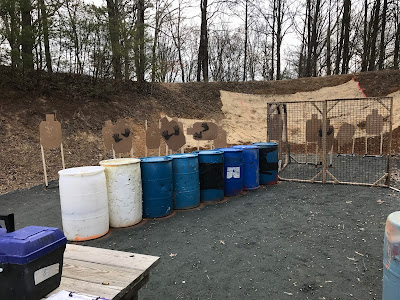 Next we moved to a stage with a line of six targets, each requiring three hits, at least one of which must be a head shot. Adding to the challenge was the placement of non-threats lined up behind the targets. You had to shoot the targets from just the right angle to avoid a shoot through to the penalty targets.

Moving on, we got to the "selfie stick" stage. The scenario was that we were millennials who couldn't put down the selfie stick, even if we were being shot at. We had to carry the selfie stick throughout the stage, which meant shooting it all one-handed. I shot this one just one point down but did have a bit of a struggle reloading while holding the stick. I managed to trap the tip of my pinky finger in the mag well when inserting the magazine. It wasn't until a few stages later that it turned purple and started thumping. I'll need to practice inserting the magazine while holding another object in the same hand — before I shoot an upcoming match requiring the use of a flashlight.

The next stage is another I found especially fun. It was also the stage on which I had my best finish — 5th place overall. The loaded gun and our spare magazines were left on a table. Our hand was on a bag, the pulling of which activated a swinging pair of a non-threat and a threat target. The two moved independently, exposing the target for varying bits of time. The swinger also settled quickly so you had to shoot it before the target was hidden again. First there were two targets to be engaged through a low port. So, shoot through the low port, quickly move to the swinger, then run back to the other side to finish, grabbing the reload off the table on the way. 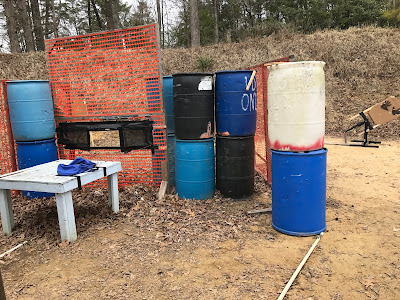 The "standards" stage for the match consisted simply of three targets placed behind two non-threats, and was shot in two strings. The first string was strong hand only, the second was done weak hand. Each string required two body shots on each target first, followed up by a head shot to each. The targets were placed fairly close. Alas, I jerked two of the heads shots, in addition to getting a few -1 hits. Time to practice more one-handed shooting.

The final stage had us shooting a mix of paper and steel while navigating the course of fire that was an L-shaped hallway. Each paper target required three hits each. Some of the targets were exposed through a very narrow opening or a high port.

Overall, I was generally pleased with how I shot. I hit only one non-threat. I missed a number of head shots, especially when I was shooting one-handed. Other than those misses, most of my lost points were -1's. A finish of 15th out of 32 in my division 34th out of 91 shooters.

Included in our match fee was a tasty lunch served by Southern Bobby-Q Catering. We had our choice of Pulled Pork, Italian Sausage, Steak and Cheese or Hot Dogs. My Italian Sausage sub with peppers and onions was delicious and hit the spot before the final stages of the match.

The Chesapeake Cup was a fun event full of stages to which entertained and challenged us. Shooting the compact gun was both fun and frustrating at times. However, the match also confirmed to me that I can be confident shooting and carrying it. Nonetheless I'm looking forward to some range time with a full-size gun next week.