Last Sunday I shot the monthly Cavalier IDPA match. Despite the 70° plus temperatures the day before, the thermometer on match day barely made it out of the mid-40's. However the sun was shining and the bay berms blocked the wind, so all in all it was a most pleasant morning for shooting.

Four fun stages of shooting awaited us. The first stage consisted of two short strings of fire. The first had three targets, each requiring two body and one head shot each. The second string presented four targets, three shot in the open, the last around a wall. The tricky things about these short, close courses is they need to be shot fast, but it's easy to go too fast and rack up points down. Stage two was interesting, with two quite distinct options for completing the course of fire. One could take a few long, tight shots, and reduce the of movement or run a zig-zag course around a bunch of barrels to get to closer shooting positions. I didn't see anyone opt for the long shots, although I did hear that someone on another squad did just that.

After navigating the barrels, there were a couple targets visible through some tires. At the next shooting position, a couple targets were visible around the right side of a wall. The final point of cover had three targets shot from the left of a wall. 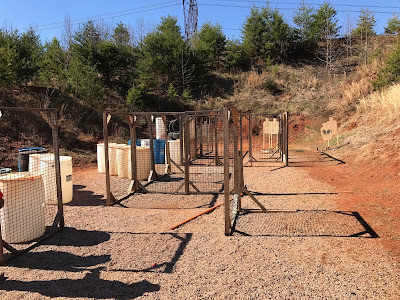 Stage 3 was another bay holding two courses of fire, each a full stage in it's own right. This is the stage on which I started the match. The first string had five targets, each requiring three hits each. We started with two open targets, engaged while standing still or backing up. Next a close, ground level target from cover, before moving to the final two targets also from cover. It was when I got to these last two targets, that I suddenly had the thought that I had engaged the first three targets with only two shots each. That wondering doubt stayed with me through the next string.

The next string started where we had finished the previous string, and began with a short run to shoot a lone steel popper in the distance. After the steel we moved around the barrier walls finding six more targets at three shooting positions. Finally at the end of this run, I was relieved to confirm that I did indeed shoot all the required shots on the previous string.

The final stage of the match had a couple of interesting "obstacles" to work around; just the sort of fun shooting we can always expect at Cavalier. The stage started with three pieces of falling steel. Then we retreated to an opening blocked by two stacked barrels. We were required to knock off the top barrel, which exposed a single target partially blocked by a non-threat. Retreating further, we found the same situation on the opposite side. A short retreat further up range, we faced a low opening, under which we ducked, moving up to a narrow long port where the final two targets were engaged. 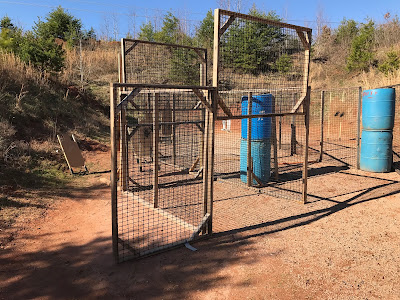 As is usual, the Cavalier match provided fun and fast stages. The entire match was shot in just over two hours. I was generally well-pleased with how I shot, finishing 8th out of 38 overall and 5th of 13 in the division. I was just 2 target points down for the entire match, but I also had one frustrating hit on a non-threat. It goes to show just how much accuracy matters; that one penalty hit, theoretically cost 3 places in the overall standing. 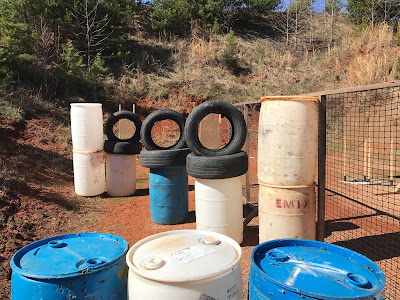 There's a bit of a match dry spell for a few weeks, and even range time for practice will be limited. It's a good time for some dry fire I suppose.